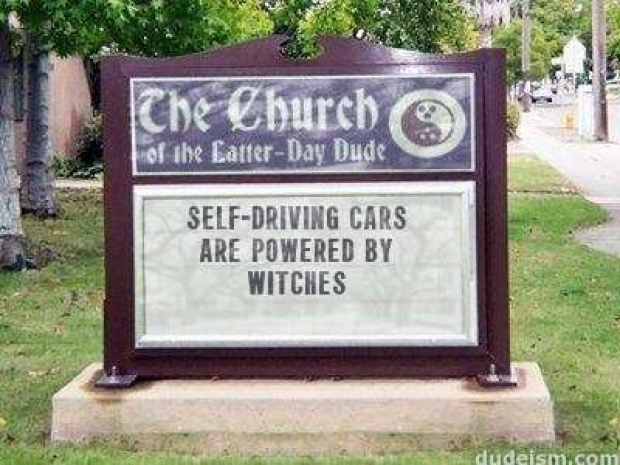 They are powered by witches and driven by Satan

A new survey of US adults think automated vehicles are more dangerous than current models and nearly two thirds said they would not buy a fully autonomous vehicle.

This could be bad news for car and truck makers, delivery companies, technology companies and ride services operators such as Uber Technologies and Lyft. They are all chucking a lot of cash into developing self-driving vehicles and related hardware. Knowing that their customers are too scared to get behind the wheel of their product is a bit of a downer.

The findings are similar to those in a 2018 Reuters/Ipsos poll. They are consistent with results in surveys by Pew Research Centre, the American Automobile Association and others. In March 2018, after the 2018 Reuters/Ipsos poll, an Uber vehicle operating in self-driving mode struck and killed a pedestrian in Arizona.

To be fair, few US residents have seen or ridden in a self-driving vehicle, but that does not stop them having an opinion about the concept. After all, many think the world is flat and that the national socialists were communists.

The long and short of it is that once Americans see that self driving cars are not going to take their guns away they should settle down and trust them a bit more.

Dan Sperling, director of the Institute of Transportation Studies at the University of California said: “At the moment, those responses are largely based on zero knowledge and zero experience, so it’s mostly a visceral reaction to something they read about, like the (2018) Uber crash in Arizona."

Last modified on 02 April 2019
Rate this item
(0 votes)
Tagged under
More in this category: « MobileEye mocks Nvidia as a copycat Autotalks passes Chinese C-V2X field test »
back to top