Noblechairs teams up with Bethesda for some cool chairs 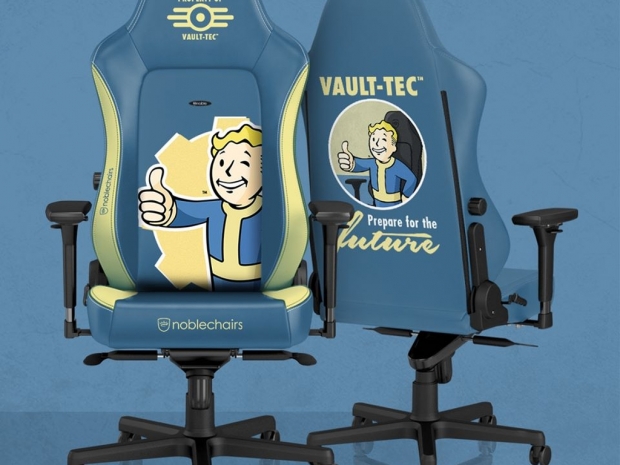 Noblechairs, a well-known maker of premium seating for gamers, has announced a partnership deal with Bethesda, which will result in some cool graphics and color schemes.

According to details provided by Noblechairs, the partnership will extend on Fallout and Doom franchises and will be coming this year.

Unfortunately, there are no details if Noblechairs will only implement graphics from these two games, like the blue and yellow color scheme as well as Vault Boy and the Vault-Tec logos, or there will be some other features included. They did say that the Doom Edition, which will be detailed later, will include Doom logo, Doom Slayers's Club logo, as well as Slayer Glyph logo.

"Bethesda is one of the industry's most respected and accomplished game studios in the world. A partnership with a global high-end gaming chair brand is a great match for those who want to play games in comfort. I'm looking forward to seeing the final designs in the flesh, rip and tear", said Steven Levitt, Business Development Manager at noblechairs.

"As a huge fan of Fallout and Bethesda's various other properties, it's a dream come true to be able to pair the premium quality and ergonomics of noblechairs with one of the greatest game designers around. Welcome home", said Glen Rhodes, Senior Product Manager at noblechairs.

We are definitely looking forward to more details, as we still do not know which series, Epic, Hero, or Icon, will be getting these makeovers. Recently, Noblechairs made quite an impression with its partnership with Mercedes-AMG Grand Prix Limited for a special edition of the Epic Series, called the Epic Mercedes-AMG Petronas Motorsport Special Edition.