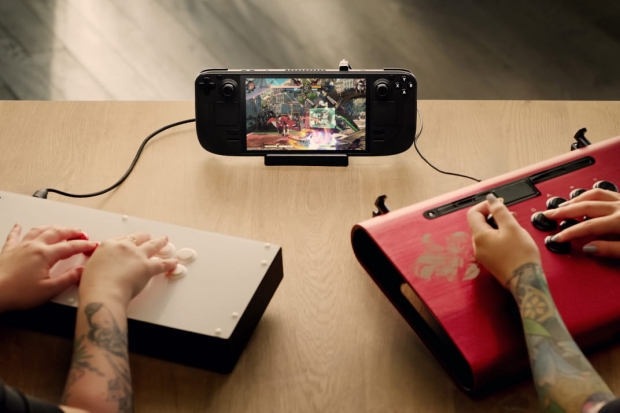 PC games on the go

The device has a seven-inch screen and runs on a quad-core Zen 2 CPU, coupled with AMD RDNA 2 graphics and 16GB of RAM. Storage runs 64GB to 512GB, the extra storage jacks the price up to $649. The built-in storage can be augmented via microSD.

Steam Deck plays nice with the Steam platform and is controlled through a Steam account and a user’s library. There’s a dedicated Steam button.

There is a 1280 x 800 touchscreen with a pair of trackpads and thumbsticks. A built-in gyroscope uses movement to control the gaming experience. There’s a single USB-C port for charging, peripherals, and connecting to a big screen, while a 40Wh battery promises between 7-8 hours of gameplay, by Valve’s numbers.

The much-rumoured system finds itself with some stiff competition from Nintendo’s Switch and the Nvidia Shield Portable but it does have better graphics. It will fill a gap as cloud-based gaming from companies like Microsoft are still working on a foothold as they deal with latency and other technical limitations.

The system is available for preorder and ships this December, in time for the holidays.

Last modified on 16 July 2021
Rate this item
(0 votes)
Tagged under
More in this category: « Valve announces its own handheld Steam Deck console Valve Steam Deck has M.2 SSD slot but might not be easily upgradable »
back to top