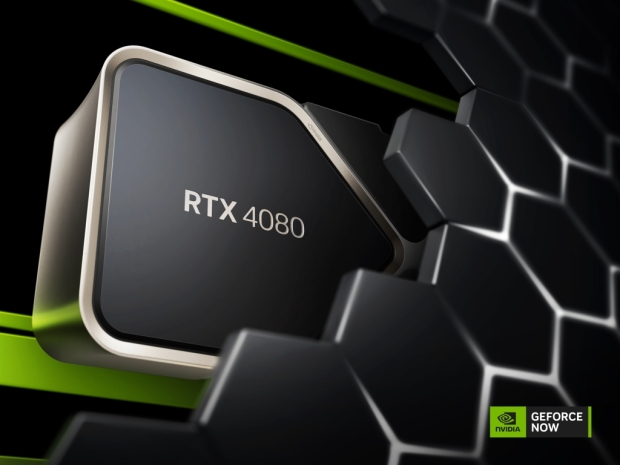 Over 64 TFLOPs per user

Nvidia has announced that its Geforce NOW is powered by Ada Lovelace architecture, delivering over 64 TFLOPs per user.

According to the announcement, Nvidia upgraded Geforce NOW RTX 4080 SuperPODs should bring a significant performance gain with Ada Lovelace architecture, bringing more than 5x the performance that of an Xbox Series X and nearly 1.75x more compared to previous generation SuperPODs.

"NVIDIA's Ada architecture is a big leap in graphics quality, and through GeForce NOW we're streaming an RTX 4080 experience to more devices and more gamers than ever," said Jeff Fisher, senior vice president of GeForce at NVIDIA. "GeForce NOW Ultimate members will have the technology and the performance to experience even the most demanding games in their full ray-traced glory."

Available to Geforce NOW Ultimate members, the new SuperPODs can stream at up to 240 frames per second from the cloud with full ray tracing and DLSS 3.

Current GeForce NOW RTX 3080 members will be upgraded immediately to Ultimate memberships and be among the first to experience the full benefits of GeForce RTX 4080 performance in the cloud when the servers start rolling out later this month.

Nvidia is promising a lot of new games and some are already available, like Marvel's Midnight Suns, Warhammer 40,000: Darktide and The Witcher 3: Wild Hunt Next-Gen Update, as well as massive, free-to-play titles like Destiny 2, Lost Ark and Apex Legends.

The GeForce NOW Ultimate membership is available for new user sign-ups today, at $19.99 per month or $99.99 for six months. GeForce RTX 3080 members' accounts have already been converted to the new membership at their current pricing.

Upgraded GeForce RTX 4080 performance streaming from the new SuperPODs will be available in North America and Europe starting later this month, with continued rollout over the months to follow.