To be showcased at Computex

MSI will have a wide variety of products at this year's Computex show but as far as GPU are concerned MSI new N580GTX Lightning Xtreme Edition will certainly be the star of the show. MSI's newest Lightning member will be the cream of the crop when it comes to graphics cards and will have some quite unique features including the triple temperature monitors, new fans with Smart Temp Sensor for the quite well known Twin Frozr III cooler and a decent factory overclock.

MSI kept things quite simple as it comes to look of the card as this one will use the blue on black colour scheme with black PCB, black shroud and two blue fans. The precise clocks still haven't been confirmed but we managed to find out that it might be clocked somewhere at around 832MHz for the GF110 GPU and 4200MHz for 3GB of GDDR5 memory paired up with a 384-bit memory. The extra, or to be precise the double amount of memory should help the card to give out much better perfromance numbers at high resolutions, multi-screen setups and tesselation usage.

MSI has chosen the Twin Frozr III cooler for this one but with some new features. The two fans will feature Dust Removal Tech making the fans spin in reverse for 30 seconds upon system startup in order to clear the dust buildup. The N580GTX Lightning Xtreme Edition will also be the first graphics card to have three temperature sensors for GPU, Memory and MOSFET, as well as an unique Smart Temperature Technology that will change the color of the fans from blue to white as the card goes over 45C.

In addition to the N580GTX Lightning Xtreme Edition, MSI will showcase the plain N580GTX Lightning with 3GB of memory and a R6970 Lightning card as well. More details regarding the price, availability date and confirmed specs should be available as soon as Computex kicks off next week. 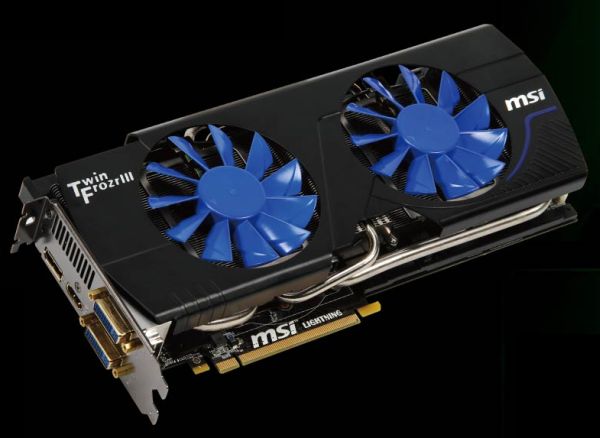 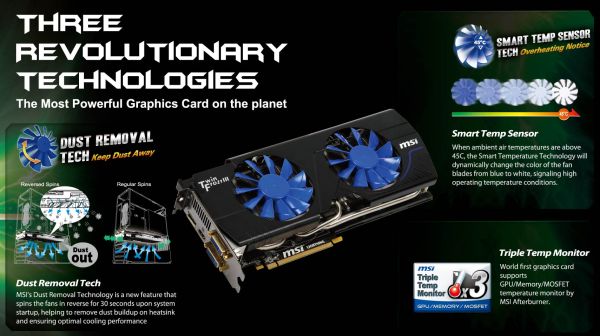