Although it has been previewed and sneak peaked before, EVGA has now officially unveiled the final design of its GTX 580 Classified graphics card. Featuring unique design with a non-standard height PCB, upgraded VRM, three PCI-Express power connectors and almost everything you need if you are going for a long night GPU overclocking sessions.

The new EVGA GTX 580 Classified will still feature 512 CUDA cores and although final clocks weren't announced you can expect it have a hefty factory overclock. The full list of features and specs is quite extensive and this beast will feature and need no less than two 8-pin and one 6-pin PCI-Express power connector in order to keep those overclocking settings stable.

It will also use NEC Proadlizer capacitors, have a 14+3 phase VRM, dual BIOS, voltage status LEDs, advanced power monitoring and much more. The entire card is cooled by a massive dual-slot cooler with a large blower style fan.

Currently it is only known that the EVGA GTX 580 Classified will be avilable in both 1.5GB and 3GB versions and that it might be available as of late August, but the date still has to be confirmed. Unfortunately, there hasn't been any talk regarding the possible price of the new Classified card. 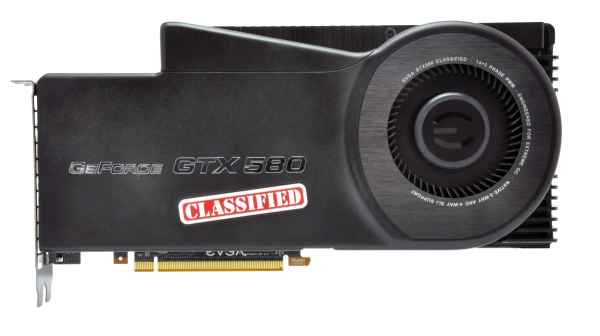 Last modified on 17 August 2011
Rate this item
(1 Vote)
Tagged under
More in this category: « Kepler production starts this year AMD releases Catalyst 11.8 »
back to top