Sapphire has rolled out yet another HD 6970 from its labs, the refenence clocked Sapphire HD 6970 Dual Fan. However, despite the reference clocks the new card will feature should feature great overclocking potential, courtesy of the new new Dual Fan cooler design as well as Dual BIOS.

The card features 1536 stream processors, works at 880MHz for the GPU and features 2GB of GDDR5 memory clocked at 5500MHz and paired up with a 256-bit memory interface. The new custom Dual Fan cooler features two 90mm fans with thin impellers that should move the same amount of air at ten percent lower rotation speeds, which means that this one should end up quieter than the competition.

The Dual BIOS feature will keep the card up to 25 percent cooler and quieter when set at standard BIOS. The performance setting, or simply a second BIOS, will kick the GPU core voltage to 1.2V and set the fan to high performance profile that should allow a decent overclocking on this one.

According to what we know, all new shipments of HD 6970 from Sapphire will be this new model without any price change. 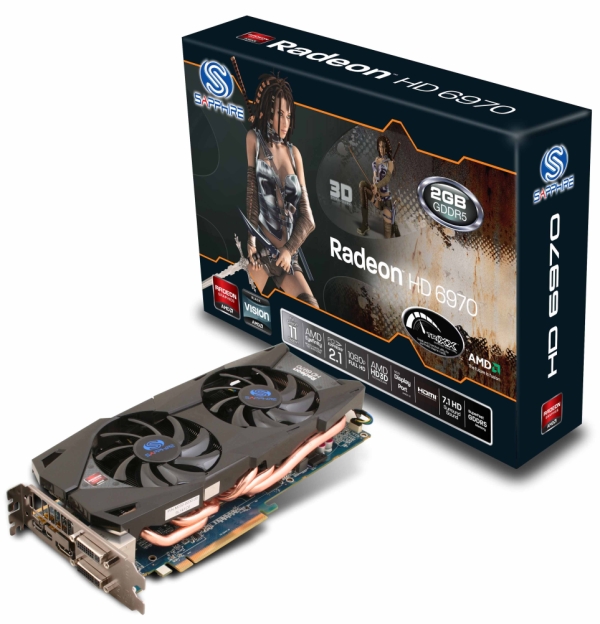 Last modified on 01 November 2011
Rate this item
(0 votes)
Tagged under
More in this category: « AMD rolls out new FirePro professional graphics card Volume shipments of 28nm AMD graphics in 2012 »
back to top