One to have for latest game titles


Nvidia has released a new Geforce 310.70 driver that is actually the culmination of all recent beta releases, and are, according to Nvidia, an essentail upgrade for all Geforce GTX gamers.

Although not WHQL-certified driver, this one is the next best thing after beta, WHQL-candidate driver. It feature performance improvements of up to 37 percent in some of the latest games, add TXAA support for COD: Black Ops II and Assassin's Creed III.

The new driver also includes performance improvement for Far Cry 3 for the GTX 670, GTX 680 and GTX 690 graphics cards as well as improvements for a wide list of games across the entire Geforce GTX 600 series range. It also features some bug fixes including shadow flickering in Assassin's Creed III, crashing in Battlefield 3, Call of Duty: Black Ops 2, Hitman: Absolution and some other games.

We are quite sure that we will see the WHQL-certified driver pretty soon.

You can check out full performance and bug fix details here and the new driver can be found here. 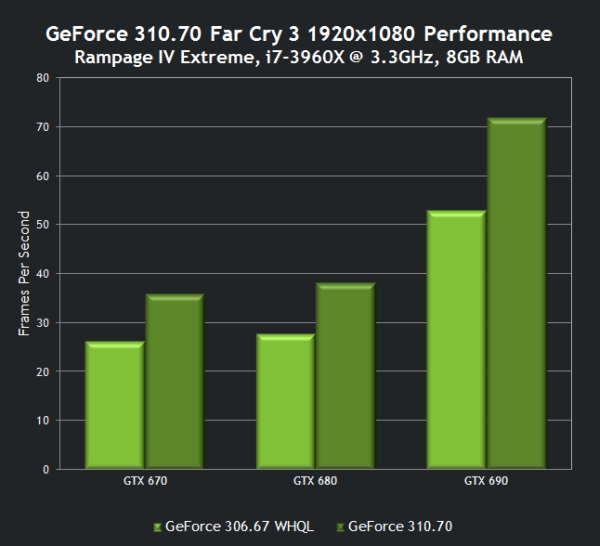