Just as expected, Sapphire has announced that it will start shipping the AMD Radeon HD 7990 graphics card with two 28nm Tahiti GPUs based on AMD's GCN architecture.

Like all AMD partners Sapphire will also have to stick with AMD's reference design. In case you missed it, the AMD Radeon HD 7990 features two 28nm fully enabled Tahiti GPUs for a total of 4096 stream processors and 6GB of GDDR5 memory (3GB per GPU). The GPUs are working at 950MHz base and 1000MHz Boost clocks and while 6GB of GDDR5 memory paired up with 2x384-bit memory interface ended up clocked at 6000MHz.

The new AMD Radeon HD 7990 Malta features an impressive dual-slot, triple-fan cooler that can easily cope with those two GPUs and even do it at reasonably low noise levels. It features four DisplayPort and single DVI output supporting up to 5 displays in AMD Eyefinity mode.

As announced earlier, the Sapphire Radeon HD 7990 will also be a part of AMD's Never Settle Reloaded campaign and will be bundled with no less than eight games, including BioShock Infinite, Crysis 3, FarCry 3, and Tomb Raider and others. 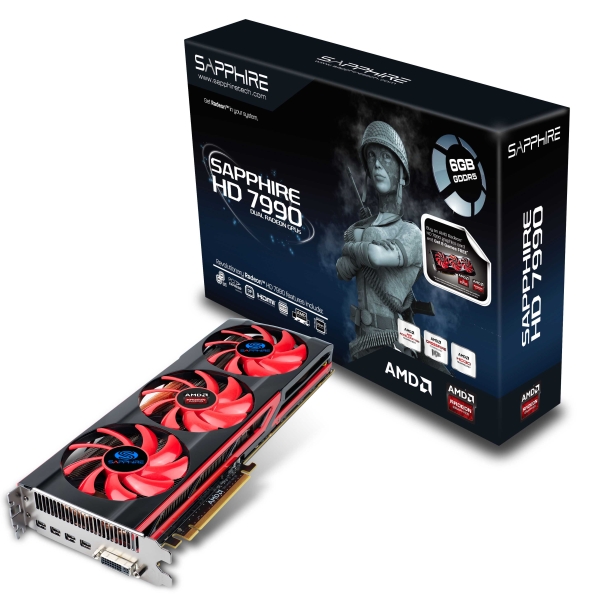