Based on the 28nm GK208 Kepler GPU, the new entry-level Geforce GT 720 packs 192 CUDA cores and features a 64-bit memory interface paired up with either 1 or 2GB of DDR3 or GDDR5 memory. According to Nvidia's specification list, the base GPU clock is set at 797MHz while memory is clocked at 1.8GHz for the DDR3 and 5.0GHz for the GDDR5 memory versions. Thus, the GT 720 offers either 14.4GB/s (DDR3) or 40GB/s (GDDR5) of memory bandwidth.

The GPU supports DirectX 12 and OpenGL 4.4, standard set of display connectors include Dual-link DVI-D, HDMI and VGA and the graphics card power is set at 19W.

The Geforce GT 720 now holds the lowest-end of Nvidia's Geforce GT 700 series lineup, while the rest of the GT 600 lineup is still listed as available.

Due to its design and low TDP, most, if not all Nvidia partners will most decide to go with a low-profile designs, along with some passive designs.

While Nvidia did not announce any details regarding the price or the availability date of the GT 720, most partners have already announced their graphics cards and you can expect them to hit retail soon with a price US $49.99. 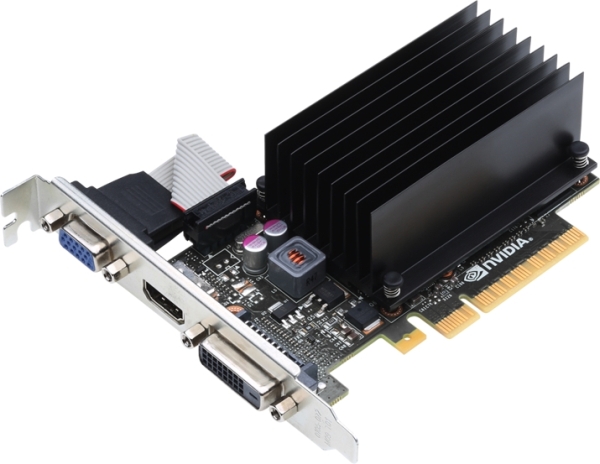