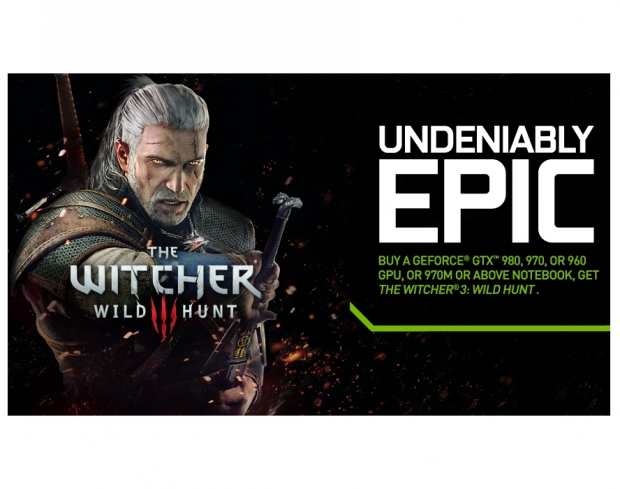 Nvidia has announced its latest bundle which will include CD Projekt Red's upcoming The Witcher 3: Wild Hunt game bundled with Geforce GTX 980, GTX 970, and GTX 960 discrete cards, as well as notebooks with Geforce GTX 970M and above GPUs.

While the game is scheduled to launch on May 19th, Nvidia has teamed up with CD Project Red and its add-in-card (AIC) partners to bundle the upcoming The Witcher 3: Wild Hunt game. We have already seen some rather impressive graphics details from plenty of screenshots as well as gameplay details from this game and it is certainly a big win for Nvidia.

According to Nvidia, this will be a limited time offer and includes customers that buy select GeForce GTX 980, 970, and 960 graphics cards, or a notebook with Geforce GTX 970M or above GPU at participating retail/e-tail shops. The full list of retailers/e-tailers can be found at Nvidia's dedicated website.

The earlier released recommended specifications for The Witcher 3 game are far from low and include Intel Core i7-3770 or AMD FX-8350 CPU paired up with either Nvidia's GTX 770 or AMD's Radeon R9 290 graphics cards, 8GB of RAM and 40GB of storage. These hardware requirements do not come as a surprise considering that The Witcher games have always came with rather impressive graphics details and are quite hardware heavy. Nvidia also noted that it has been working closely with CD Projekt Red to include Nvidia Hairworks and PhysX technologies in the game and that these will bring a new level of realism.

It is a nice bundle win for Nvidia and we are wondering if AMD is working on a new Never Settle bundle as well for its upcoming launch of new graphics cards.