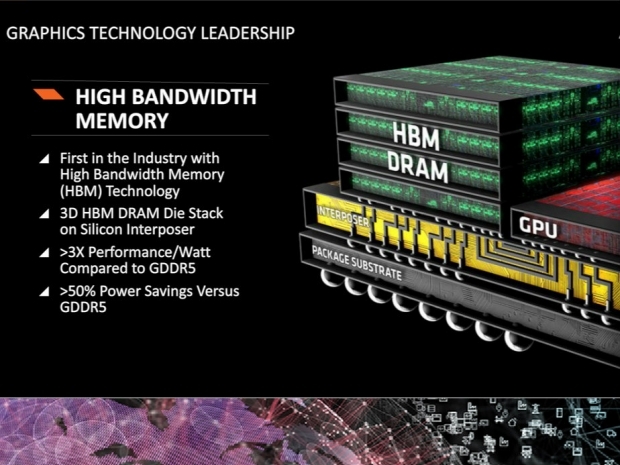 The future of graphics

High Bandwidth Memory (HBM) will define the future of graphics and it looks like Samsung will be ready to release products using the technology soon.

Our friends at Computerbase have broken the story about Samsung making High Bandwidth Memory HBM 2 memory. HBM 2.0 will find its way to HPC and Graphics cards in 2016 and Samsung expects that by 2017 this super-fast type of memory will reach the network market.  The plan is to see HBM 2.0 mainstream by 2018.

Our well placed, camera shy sources within the computer graphics industry have confirmed that SK Hynix and Samsung will be providing the memory for graphics cards in 2016. Hynix has started shipping the first generation HBM to AMD for its Fury X products and has a head start over Samsung.

Usually Samsung doesn’t fall that far behind and is quick to learn. We hear that both companies are competing for graphics cards designs in the 2016.

AMD has the Greenland high end GPU lined up while Nvidia has pinned its hopes in its first ever High Bandwidth Memory 2.0 product codenamed Pascal.

It was naive to believe reports that AMD will have SK Hynix love since it had a head start with the Fiji codenamed Fury X branded cards. Nvidia has close to 80 percent of the market, memory manufacturers including SK Hynix or Samsung cannot ignore that. They are in the business of making money.