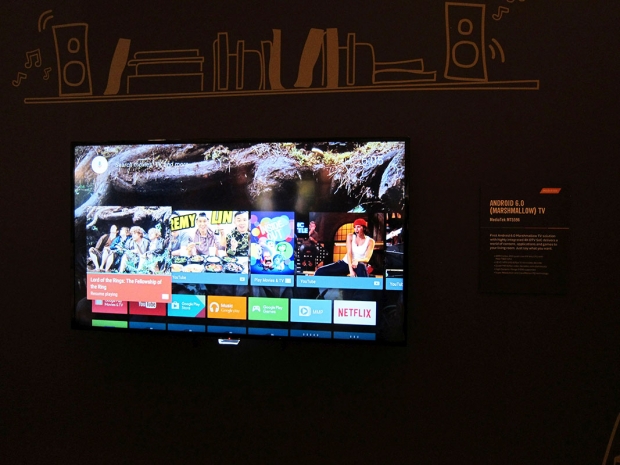 Sony started shipping its first android TV MediaTek powered devices in Q3 2015 but MediaTek appears to have beaten Sony to the punch with Android TV 6.0. The prototype TV has a new MediaTek MT5596 quad core Cortex A53 cased SoC. The new CPU cores supports the 64-bit version of Android or Android TV. The previous version of MTK SoC is currently shipping in various Sony devices has Cortex A17 based core with 32-bit support.

The GPU is a huge update and it now supports Mali T860 GPU. Gaming on your connected Android TV 6.0 Marshmallow based TV will get significantly faster.

The MT 5596 supports both HEVC and VP9 Ultra HD codecs and 10-bit video decoder. The SoC can decode Quad Full HD 60 fps video streams which can be handy if you decide to record multiple channels via a  DVR feature.

The Sony 2015 TV models came with a MediaTek MT5595 SoC, a  big.LITTLE quad-core design – in other words it packed  two Cortex-A17 and two Cortex-A7 cores.

Android 6.0 Marshmallow brings in an Android store design update and a few user and application security settings. We saw a child mode, something that was missing on the Android TV 5.1

The 4K TV that was demonstrated was a prototype, but Sony confirmed that partners will be shipping the Android TV 6.0 based on the new and updated MT 5596 SoC later this year. Both MediaTek and Google with Android TV are moving in the right direction.

Last modified on 15 January 2016
Rate this item
(7 votes)
Tagged under
More in this category: « Update to High Bandwidth Memory DRAM posted Nvidia rolls out Geforce 361.60 Hotfix driver »
back to top