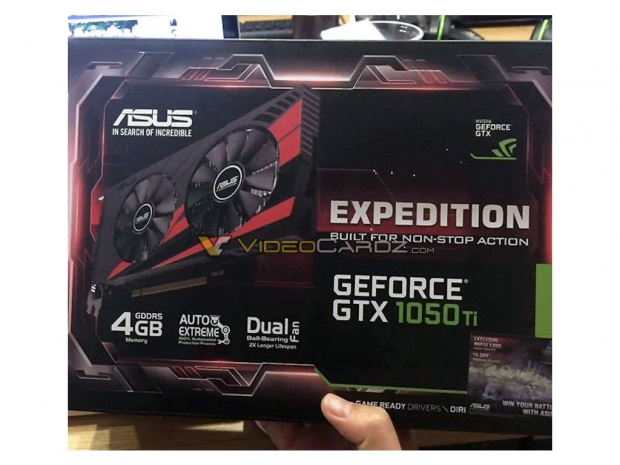 Although there are no details regarding the actual clocks of the new Asus GTX 1050 Ti Expedition, the pictured box, spotted by Videocardz.com, shows the dual-fan cooler that Asus has decided to use on this version as well as confirms that it will be coming with 4GB of GDDR5 memory. The source also suggests that it will have an additional 6-pin PCIe power connector so we can expect a factory-overclocked GPU.

As rumored earlier, the Geforce GTX 1050 Ti will be based on a fully-enabled GP107 GPU with 768 CUDA cores, 48 TMUs and 32 ROPs and come with 4GB of GDDR5 memory on a 128-bit memory interface. According to earlier leaked performance figures, the GTX 1050 Ti should offer performance similar to the GTX 960, which also means that it could fit the minimum required specification of the Oculus Rift VR headset.

Asus is also rumored to release the Strix version of the GTX 1050 Ti which should end up with a different cooler as well as a higher factory-overclock.

Both the GTX 1050 Ti and the GTX 1050 are expected to launch on October 25th, with rumored MSRP set at US $149 and US $119, respectively. There are also rumors that AMD plans a price cut on some of its Polaris-based RX 400 series graphics cards in order to compete with Nvidia. The entry-level and mainstream graphics card market will definitely heat up in during this month.