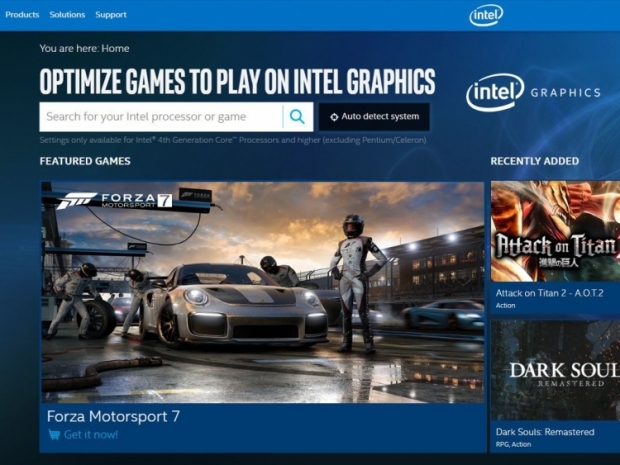 Intel has updated its graphics driver, bringing both support for new games like Strange Brigade and Pro Evolution Soccer 2019, performance improvements for some games like World of Warcraft: Battle for Azeroth and Jurrasic World Evolution, as well as some security fixes and improvements.

Intel is obviously taking the graphics market seriously now with its graphics driver updates, which is a good move since it plans to introduce its own dedicated graphics in 2020. The latest one, version 20.20.100.6286 is not an exception  it bring  day one support for Strange Brigade and Pro Evolution Soccer 2019.

Surprisingly, the new driver also brings performance improvements for World of Warcraft: Battle for Azeroth, in both DirectX 11 and DirectX 12 modes, as well as the Jurassic World Evolution games on 6th Generation Intel Core processors or higher. The release notes also suggest it comes with playability improvements for Vampyr and Monster Hunter: World, although these games are probably too demanding for integrated graphics.

The rest of th new features include media streaming improvements while using AVC codec at low bitrates (on 6th gen Core CPUs and higher), power optimizations when dynamically switching to lower refresh rates during video playback and various other security fixes and improvements.

The list also includes a couple of fixed bugs, including Steam overlay problems in Dota 2 when running in Vulkan mode, minor graphics anomalies in Titanfall 2, Minecraft, and Lego Ninjago Movie video games, bugs with crashes or hangs in Unravel 2, issues when using two displays where the arrangement settings in Windows may reset if the resolution of the second display is changed, bugs with inaccurate color during Youtube playback in web browsers with hardware acceleration, bugs with Sketchup, bugs with stereoscopic 3D, and bugs seen with remote desktop protocol (RDP) and Virtual Network Computing (VNC) applications.

You can check out the full release notes as well as download the new driver over at Intel's download center.

Last modified on 31 August 2018
Rate this item
(0 votes)
Tagged under
More in this category: « Graphic shipments fell in Q2 2018 Intel will hop on the Adaptive Sync train »
back to top