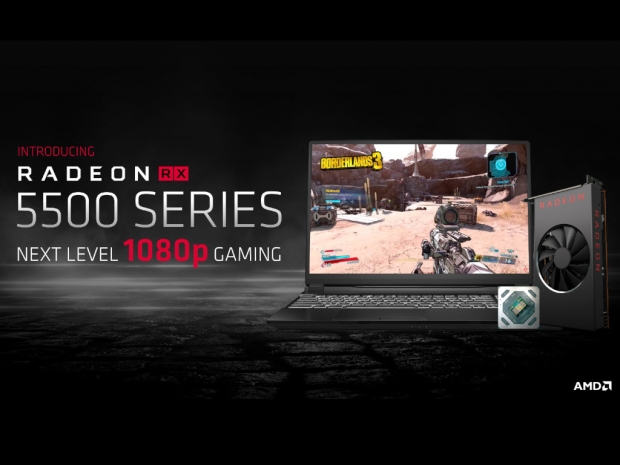 Coming to desktop and mobile markets

AMD has officially announced its new mid-range RX 5500 series graphics cards based on the Navi GPU and the new RDNA architecture, aiming to put a bit more pressure on Nvidia's mid-range lineup.

Based on the same 7nm Navi GPU architecture as the previously launched RX 5700 series, the new RX 5500 series packs 22 Compute Units (CUs) for a total of 1408 Stream Processors. Interestingly enough, both desktop RX 5500 series and the mobile RX 5500M versions share the same number of CUs and Stream processors, but the mobile version will have slightly lower GPU clocks, leaving it with up to 4.6 TFLOPs of compute performance, down from 5.2 on the desktop counterparts. 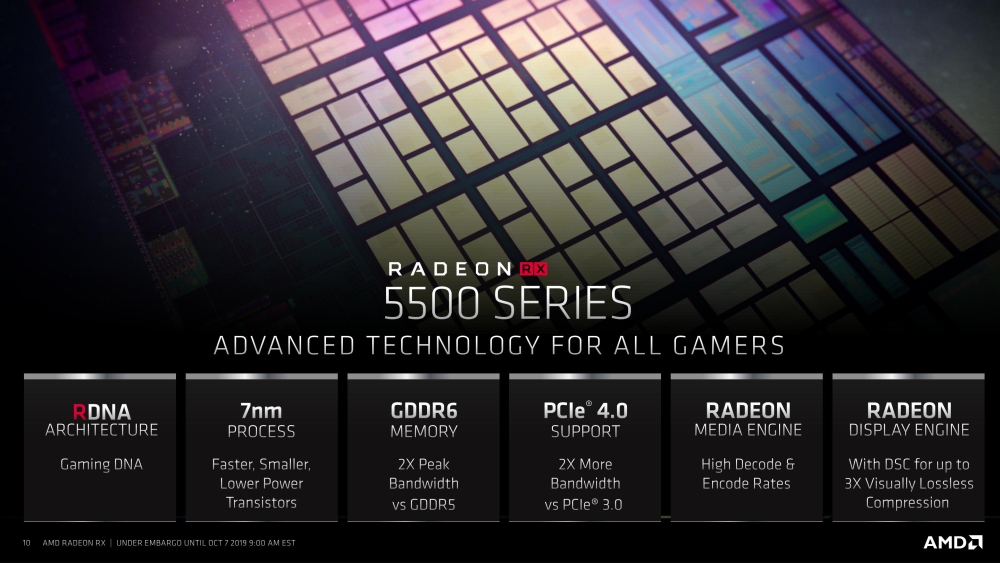 When it comes to actual GPU clocks, the desktop RX 5500 series works at up to 1717MHz game clock with Boost clock hitting 1845MHz, while the mobile counterpart will work at up to 1448MHz game clock and 1645MHz GPU boost clock. The desktop version has a TDP of 150W, while the mobile version will have a lower TDP which can be configured by notebook makers, by simply adjusting the clocks. 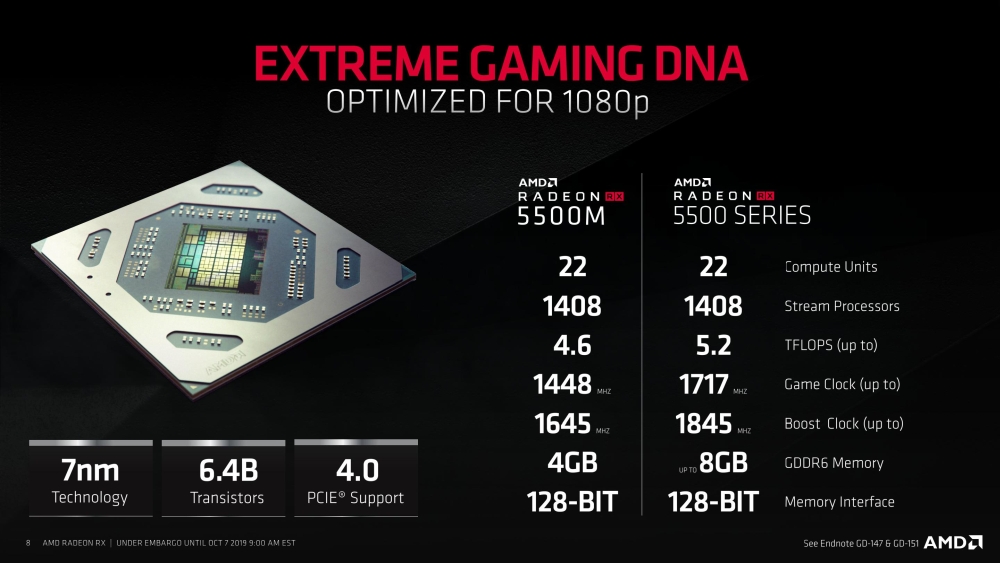 AMD was keen to compare the new RX 5500 series with its the RX 480, boosting a 1.6x performance per Watt increase, with 12 percent higher performance and up to 30 percent lower power consumption. The 7nm Navi GPU behind the RX 5500 has 6.4b transistors on a 158mm2 die, offering 1.7x performance per area compared to the 14nm Polaris 10 XT GPU powering the RX 480. 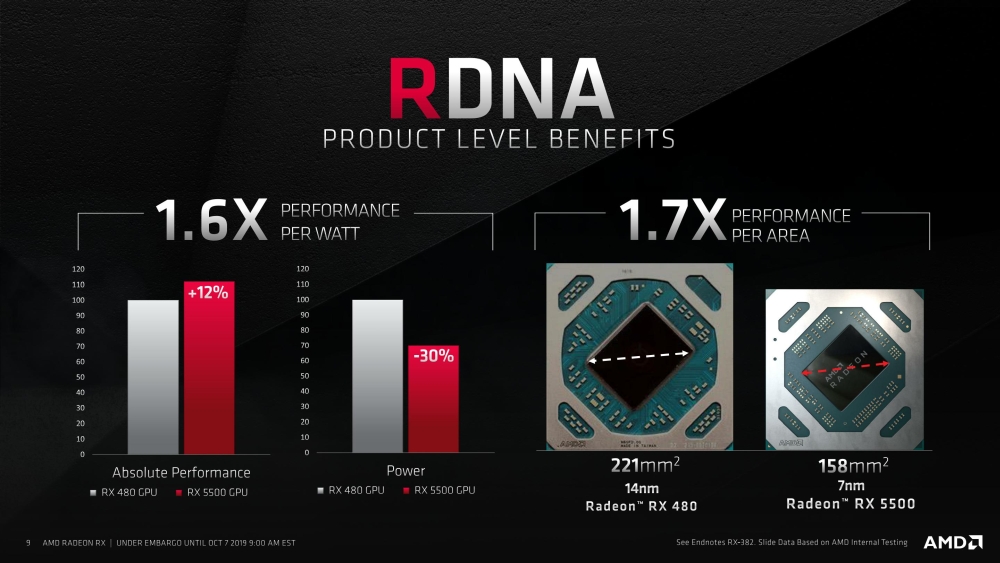 Performance-wise, AMD is claiming up to 37 percent faster average gaming performance compared to the Nvidia GTX 1650 in most eSports games like Fortnite, Apex Legends, PUBG, WoW, Overwatch and others, as well as higher performance in games like Gears 5, Borderlands 3, and Ghost Recon Breakpoint. 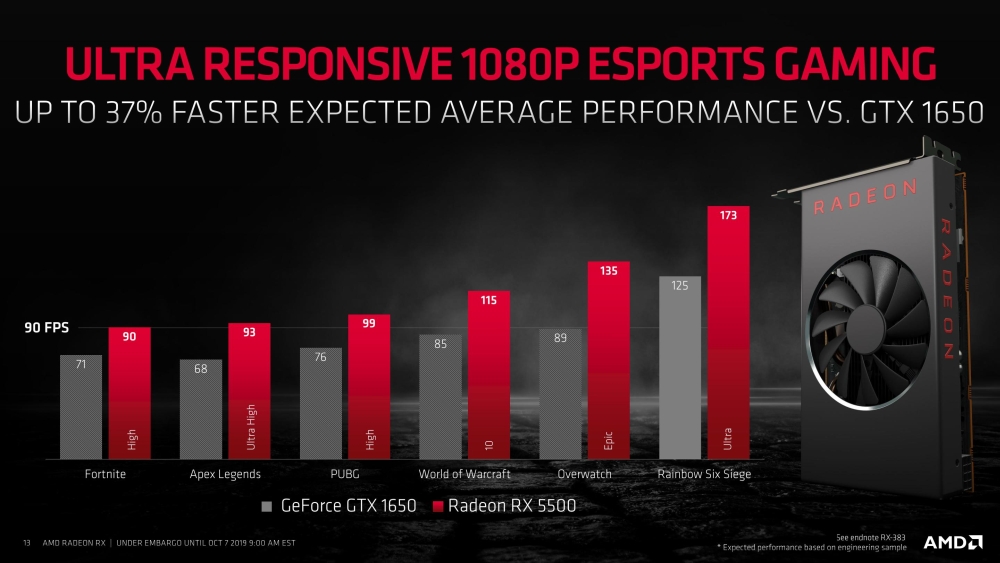 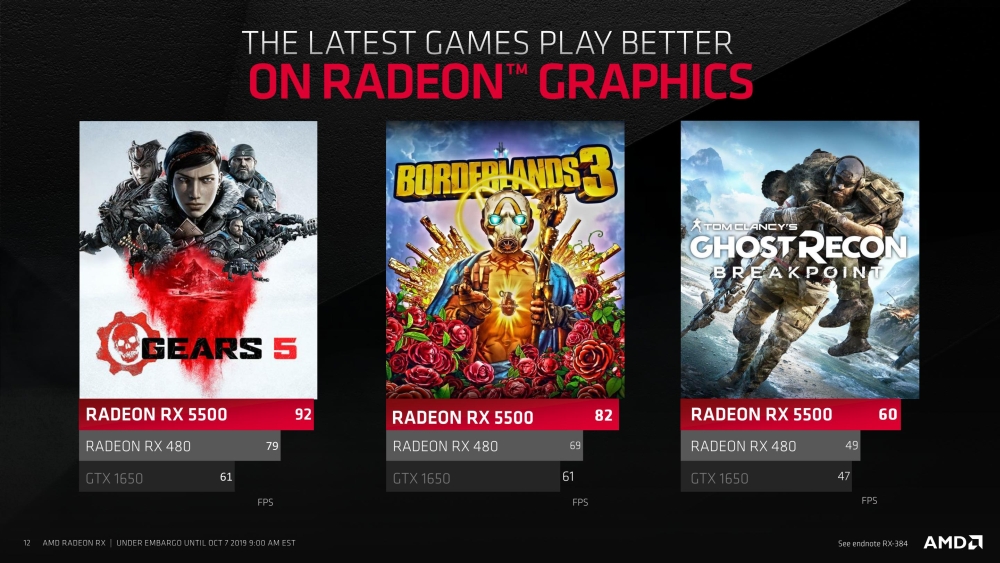 Unfortunately, it is still not clear if there will be an XT and non-XT versions of the RX 5500, as there are no details on the actual GPU variant, and we still do not have an actual price of the RX 5500 series or the official release date. We do know that there won't be a reference version so we expect plenty of custom versions from various AMD AIB partners.