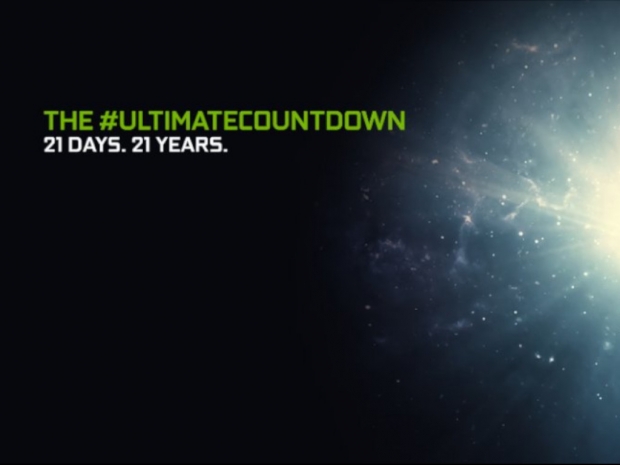 21st anniversary of the Geforce 256

Nvidia has released a teaser called "Ultimate Countdown", and has promised something big for its 21st anniversary of the Geforce 256 release, set on August 31st. In the meantime, more rumors have come up about the upcoming Nvidia RTX Ampere series.

Teaser, which counts down 21 days to August 31st, is also the 21st anniversary of the Geforce 256, a card that changed a lot of things back when it was announced on August 31st, 1999, and launched on October 11th, 1999. Based on TSMC's 220nm CMOS manufacturing process, the NV10 GPU behind the Geforce 256, brought significant improvements, including DDR VRAM (first launched with SDR VRAM), and the card was marketed as the world's first GPU.

The teaser does not show much, but hopefully, we will hear more in the coming days. There is a possibility that Nvidia could announce its Ampere based Quadro cards, as it has done with Turing-based RTX series, or we could see a full-on announcement of the entire lineup, including the consumer-oriented Geforce RTX series.

In the meantime, more rumors regarding Nvidia's RTX Ampere series have shown up suggesting an announcement or launch on September 9th or September 17th, depending on rumor sources. This lines up with the mid-September launch which we heard before, and which Nvidia AIC partners have been told in order to prepare.

Another rumor heard online, spotted over at Videocardz.com and picked up from Wccftech, is that we could see a 20GB memory model in the Ampere RTX series. Previously, we already heard from Igor'sLAB that PG132 board could come in 24GB, 11GB, and 10GB versions, so 20GB one is a new thing.

In any case, these will be interesting few days as Nvidia is obviously gearing up for something big in the coming days so, hopefully, we will get much more solid information.

Last modified on 11 August 2020
Rate this item
(1 Vote)
Tagged under
More in this category: « AMD releases new Radeon Software 20.8.1 driver Nvidia AIC partners may be ready with custom cards on launch day »
back to top