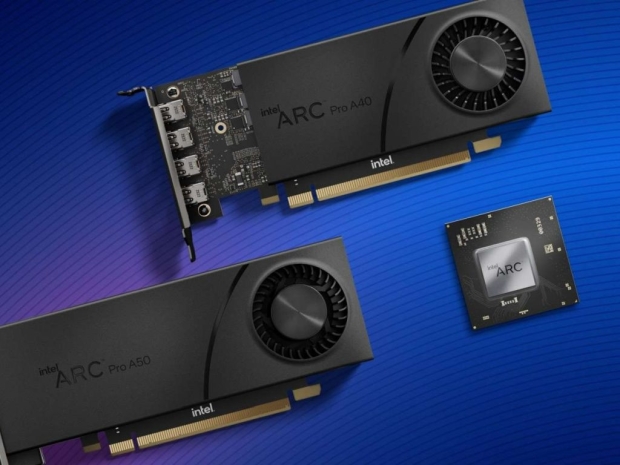 According to Intel, the Arc Pro A50 packs eight ray tracing cores and 6GB of GDDR6 memory, peaking at 4.8 TFLOPs of single-precision compute performance. The TDP is set at 75W and it comes with four mini-DP ports for video output, with an ability to drive two 8K 60Hz, one 5K 240Hz, two 5K 120Hz, or four 4K 60Hz monitors. Although meant for SFF systems, the low-profile Arc Pro A50 is a dual-slot design.

The Arc Pro A40 low-profile card peaks at 3.5 TFLOPs of single-precision compute performance, eight ray tracing core, 6GB of GDDR6 memory, and drops the TDP down to 50W (most likely due to lower clocks). It is a single-slot card and has the same output capabilities as the Pro A50.

The mobile SKU, the Arc Pro A30M, has a configurable TDP of 35W-50W, and has the same 8 ray tracing cores, but drops down to 4GB of GDDR6 memory. The single-precision compute performance peaks at 3.5 TFLOPs. The display output configuration is listed as "laptop specific with support for up to 4x".

According to Intel, the new Arc Pro A-series GPUS will be available later this year from Intel's mobile and desktop partners and we should hear more about it during SIGGRAPH, which is held from August 8th to August 11th.

Rate this item
(2 votes)
Tagged under
More in this category: « Nvidia tiggered by collapse in crypto LG telly creates sound “without speakers” »
back to top