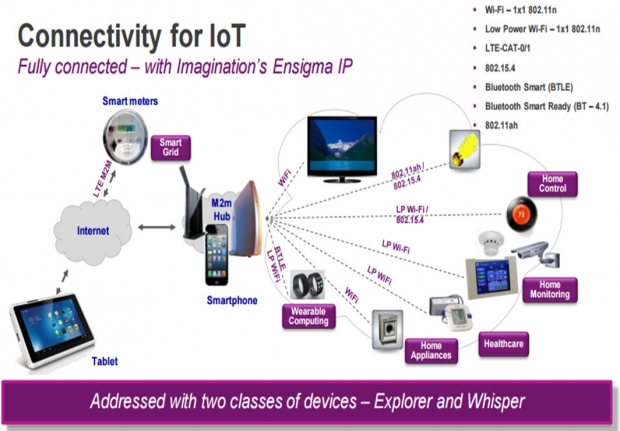 Chipmaker Imagination has launched a new suite of Ensigma IP solutions which cover Wi-Fi/Bluetooth software, MAC baseband, AFE and RF for the Internet of Things.

Imagination will supply RPUs to those who want the solution from a third party instead of making it themselves, and it can also provide them with RF IP, if they need it for their products, the outfit said.

Imagination offers complete connectivity products which encourages customers to be more interested in buying other gear to match.

Imagination has partnered with some RF providers, but it's also working with RF technology that was built in-house by some of its customers, to ensure these technologies are compatible with its Ensigma basebands.

Customers who don't already have their own RF technology can license Imagination's own Ensigma RF, either as IP blocks for SoC integration or for standalone use.

One of these customers is Toshiya Matsui, general manager of Toshiba who said he used multiple Imagination IP cores in its highly integrated IoT processors.

"This includes the Ensigma Explorer RPU that provides the high-speed Wi-Fi which is a hallmark of these processors. The fact that Imagination also offers RF made it easy for us to take these processors into production."

Chakra Parvathaneni, vice president of Ensigma business operations at Imagination, said that more connectivity solutions will become integrated into the SoC.
Imagination has been preparing for this transition with the "world's most complete end-to-end connectivity IP solutions from RF to baseband."

Ensigma Explorer and the lower powered Whisper RPU families were shipping in their millions.

Rate this item
(2 votes)
Tagged under
More in this category: « Qualcomm flogs off AR unit China’s IoT market will grow faster than others »
back to top