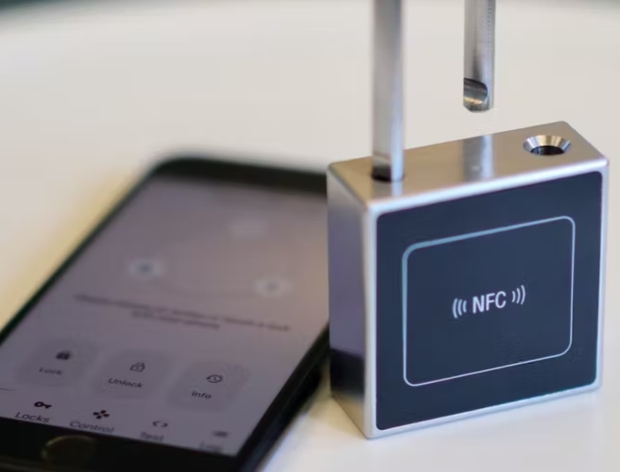 No batteries just use your phone

Infineon, which has a new chip for sale that allows the opening of NFC locks without battery, because the energy used is taken from the smartphone.

Dubbed NAC1080 and is based on a 32-bit ARM Cortex M0 CPU, a processor widely used in the IoT field due to its low energy consumption. The NAC1080 uses Near Field Communication to talk to locks.  It can recognise the phone approaching the NFC antenna, and is able to collect the energy of the smartphone and use it to operate simple mechanisms, such as the lock of the padlock. matched to the chip by Infineon to present its technology.

Infineon’s chip has a small 3V electric motor and a capacitor that accumulates a small charge from the phone to power the motor and allow the padlock lock to open and close.

The chip of course also has a 60KB Non-Volatile Memory (NVM) library that it can be used to store the access credentials of the NFC device approaching the lock; otherwise any smartphone would be enough to unlock the padlock or activate the mechanism you want to control.

While the tech has been around for a while Infineon has only the chip for sale that can do the job.

Last modified on 28 July 2022
Rate this item
(1 Vote)
Tagged under
More in this category: « Fitbit upgrades Charge 5 to track your phone Xiaomi releases new smart glasses »
back to top