Toshiba Corporation has announced the world's fastest microSD memory cards which are the first ones that will comply with the UHS-II inteface standard. To be available in 32 and 64GB capacities, the new memory cards will offer impressive transfer speeds of up to 260MB/s for read and 240MB/s for write, making them perfect for high-quality 4K video capture or shooting high resolution digital images in high speed shooting mode.

According to Toshiba, its new microSD memory cards will offer the fastest transfer rates available, with UHS Speed Class 3 (U3) rating, which should be enough to allow 4K video capture at constant minimum write speeds of 30MB/s. As noted, the new microSD memory cards will be available in 32GB, the THNSX032GAJCM4 and 64GB, the THNSX064GBK5M4, capacities.

These new microSD cards from Toshiba will offer unmatched transfer speeds depending on the model. The 32GB card delivers up to 260MB/s for read and 240MB/s for maximum write, while the 64GB model ends up slower, at 145MB/s read and up to 130MB/s read, according to Toshiba. The 32GB model will deliver an 8x write speed improvement and 2.7x read speed improvement compared to current Toshiba's 32GB microSD UHS-I microSD cards.

Unfortunately, Toshiba did not reveal any details regarding the price or the availability date of the new microSD memory cards but did note that the sample shipments for chipset venodrs and manufacturers of smartphones and other mobile devices are ready and available so hopefully we will see some UHS-II microSD memory cards pretty soon. 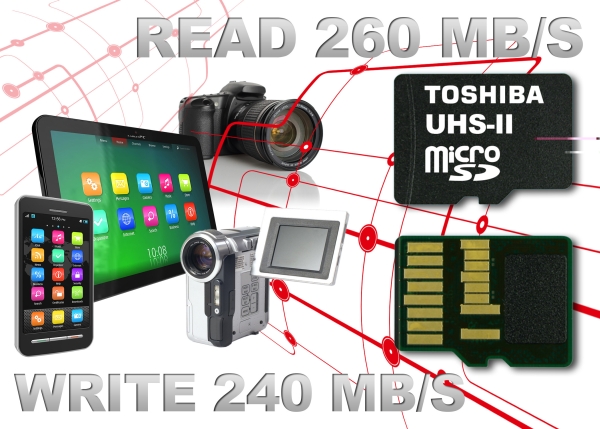 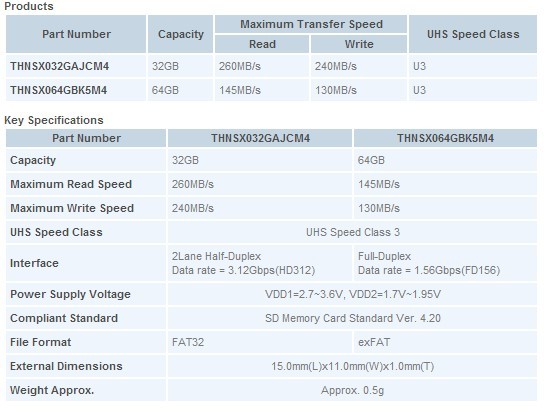