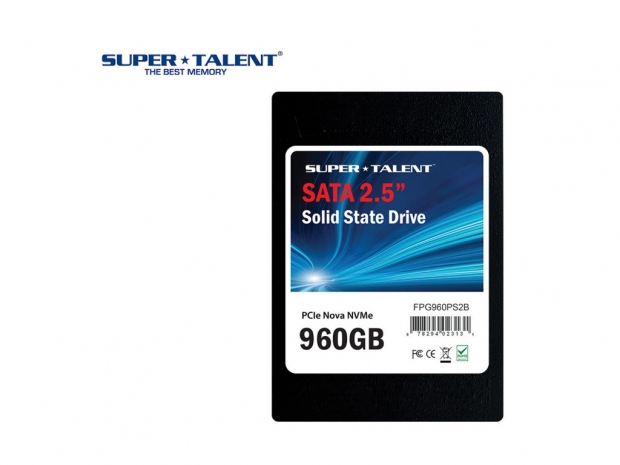 Based on MLC NAND and U.2 PCIe interface

Super Talent has announced its newest Nova SSD lineup that will be available in capacities ranging from 120GB to 1920GB and PCIe 3.0 x4 U.2 interface.

Although we do not have any precise details regarding the actual controller behind the new Super Talent Nova SSD lineup, the company did say it is using MLC NAND. The rated sequential performance is set at up to 3.0GB/s for read and up to 2.2GB/s for write.

Since the specification list on Super Talent's site is rather uninformative, it also does not include the endurance rating either but we do now that it has a mean time between failure (MTBF) rating of 1 million hours, a standard in consumer SSDs.

When it finally becomes available on the market, which is yet another unknown, Super Talent's Nova PCIe U.2 SSD won't have a lot of competition, as currently, the most popular U.2 SSD is Intel's SSD 750 series which offers significantly lower sequential performance and ranges from around US $350 for the 400GB version and over US $1000 for the 1.2TB version.

Hopefully, we will get to see some real world performance numbers as well as see it on retail/e-tail shelves soon.

Rate this item
(5 votes)
Tagged under
More in this category: « Samsung officially releases US $1500 850 EVO SSD 4TB DRAM makers fall in under Micron umbrella »
back to top