While hurricane Sandy is unfortunately intensifying and has forced Google to cancel it New York event. However, the company has thankfully decided to officially announce its latest devices, including the all new LG made Nexus 4 smartphone.

The Nexus 4 sports a 4.7-inch 1280x768 True HD IPS Plus touchscreen with Gorilla Glass 2 and it's powered by Qualcomm's Snadragon S4 Pro CPU quad-core processor clocked at 1.5GHz, backed by Adreno 320 graphics and 2GB of RAM. It has an 8-megapixel rear camera with Photo Sphere feature that is quite similar to panorama shots but let you go in any direction. The rest of the specifications include a 2100mAh battery, GSM/HSPA+ and NFC connectivity (so no LTE) and either 8 or 16GB of storage options (no microSD card slot of course).

The dimensions are set at 133.9x68.7x9.1mm and it weighs in at 139g. The Nexus 4 supports some sort of wireless charging and will ship with Android 4.2 OS, still called Jelly Bean, oddly enough.

As noted, the new Nexus 4 smartphone will be available in 8 and 16GB versions as of November 13th in the US, the UK, Germany, Australia, Canada, France, and Spain. The contract-free price is set at $299/$349 (8/16GB) in the US, while the 16GB version should hit T-Mobile for $199 on a 2-year contract. Like the Nexus 10, the Nexus 4 ended up quite a bit cheaper than expected and it could have a profound effect on the high-end Android handset market. 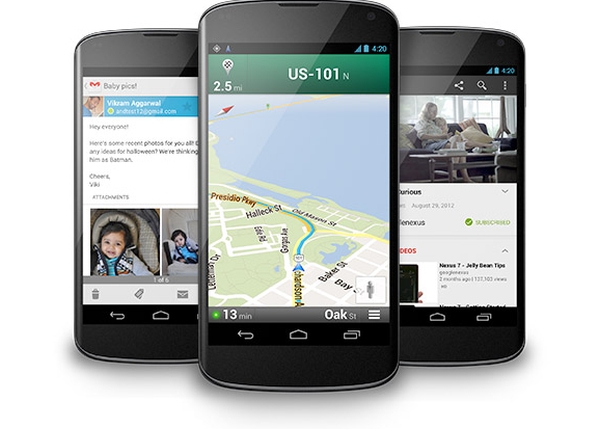 Last modified on 30 October 2012
Rate this item
(0 votes)
Tagged under
More in this category: « What is wrong with the iPhone 5 Where the Nexus 4 falls short »
back to top