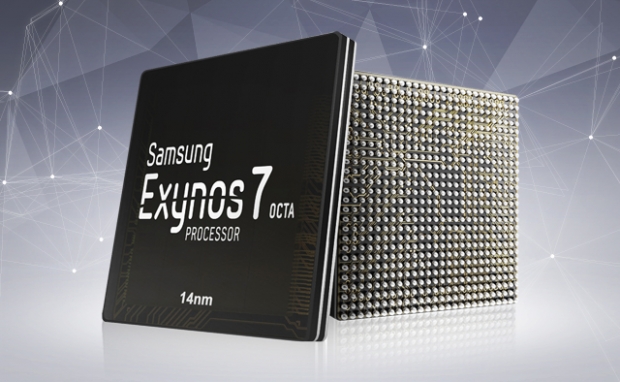 Samsung had a rather short press conference, not talking that much about what is inside its new flagship Galaxy S6 and S6 Edge phones, at least not in terms of silicon.

When we realized that Exynos 7420 is manufactured in FinFET 14nm technology and that the most popular Android phone doesn’t need Qualcomm anymore, we said this would be a pivotal moment for Samsung and the industry in general.

On February 14, Samsung announced that its new 14nm Exynos 7 Octa processor entered a volume production. When compared to Samsung’s planar 20nm technology, this new process enables up to 20 percent higher performance, 35 percent lower power consumption and an overall productivity gain of 30 percent. Bear in mind that the Galaxy S5 has a 28nm Snapdragon 801, not a 20nm Exynos, and that the performance and efficiency gap should be even wider.

T-Mobile Austria was one of the few places helped us find out a bit more about the processor. There were no big surprises. The site lists it as Exynos 7420 (14nm) (64-bit, A57 2.1G Quad + A53 1.5G Quad). In a sense the basic specification and the choice of cores puts this CPU very close to the Snapdragon 810 processor, but it's a different story in the GPU and modem department.

The Snapdragon 810 also supports native 64-bit and has four Cortex-A57 cores at 2.0GHz and four Cortex-A53 cores at 1.5GHz, but it is a planar 20nm chip. This means that head-to-head the Exynos 7420 should end up faster, while at the same time delivering superior battery life. We have to wait for some real-world tests to see the efficiency gains in action, but initial benchmarks look very promising indeed. Another thing to consider is throttling. The Snapdragon 810 suffers from aggressive throttling on the LG Flex 2, but thanks to the more advanced process, the Exynos should cope with extended load somewhat better. While the official max clock is just 100MHz on the Exynos, the processor should be able to sustain it for much longer periods of time.

Perhaps the most surprising part of the new platform is the modem. Samsung hasn’t gone on record about the modem, but according Sammobile it should be using model SS333, or Exynos Modem 333, an in-house modem. Samsung only tells the press that it is using a Cat. 6 LTE modem.

This modem can achieve speeds of 300Mbits, making it more than capable of offering a great internet experience. Cat 6 enables the Galaxy S6 to connect to two spectrums at once, aggregating both to give faster download speeds. The iPhone 6 supports LTE Category 4, offering up to 150Mbps downlink data rates and 50Mbps uplink speeds.

Qualcomm has an LTE Cat.10 capable modem to offer up to 450 Mbps downlink via 3x carrier aggregation and up to 100Mbps uplink using 2x aggregation, but most carriers simply don’t have the infrastructure to support it, at least not yet.

There is no doubt that from the hardware perspective the Galaxy S6 has the most advanced processor in the market, leaning heavily on using the world's first mobile 14nm SoC and reaping many advantages of this new process, while Qualcomm and the rest of the competition just started 20nm manufacturing and sales. That said, 2015 will be interesting year to watch in the mobile space, as FinFET becomes an option for high end SoCs and 28nm becomes even cheaper, allowing manufacturers to use more powerful chips in entry level devices.

As for 20nm, it will still be around, but with limited capacity and higher costs than 28nm, it does not have much of a future.

Last modified on 03 March 2015
Rate this item
(5 votes)
Tagged under
More in this category: « Huawei to aggressively target US market Lenovo tries its hand at a camera phone »
back to top