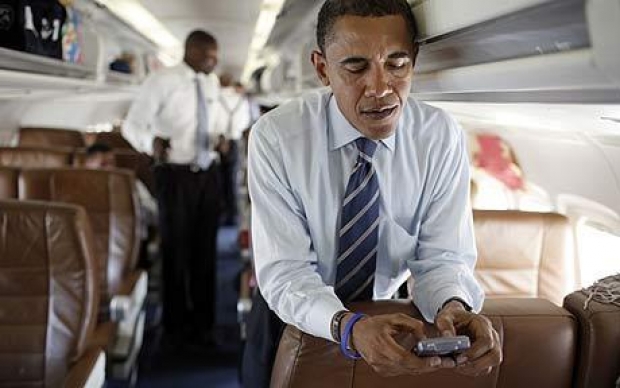 Gets a locked down Samsung instead

In a sign that Blackberry’s days are numbered, one of its key advocates, President Barack Obama has given up on it.

Obama famously fought to keep his BlackBerry when he took office, he finally compromised and was given a BlackBerry 8830 World Edition with extra crypto—for unclassified calls and e-mail. He liked his Blackberry so much he continued to carry it even though the technology was getting rather elderly.

However on Late Night with Jimmy Fallon, Barack Obama said his Blackberry days are over and he carries a secure "smartphone." Of course, he has not become an Apple user, his security people would have just laughed. Instead he was given a "hardened" Samsung Galaxy S4. T

he S4 is not an off the rack number but one which is supported under DISA's DOD Mobility Classified Capability-Secret (DMCC-S) programme.
In fact it is the only brand to get the approval from the National Security Agency under its National Information Assurance Partnership (NIAP) Commercial Solutions for Classified (CSfC) programme.

This is due to Samsung's KNOX security technology that locks the phone down with layered with services managed by DISA and was the first commercial phone to get approval to connect to the Secret classified DOD SIPRNet network.

Sadly most of the Galaxy’s functionality is taken out for security reasons. While it uses biometric authentication, there's no user-accessible camera. The Android applications on the DMCC-S Galaxy are restricted to a selection from DISA's Mobile Application Store (MAS).

Obama's device appears to have even further restrictions for security purposes. Obama told Fallon that he couldn’t place phone calls on it. This is probably because the phone is likely restricted to secure VoIP functionality, with outside calls controlled from a secure switchboard.