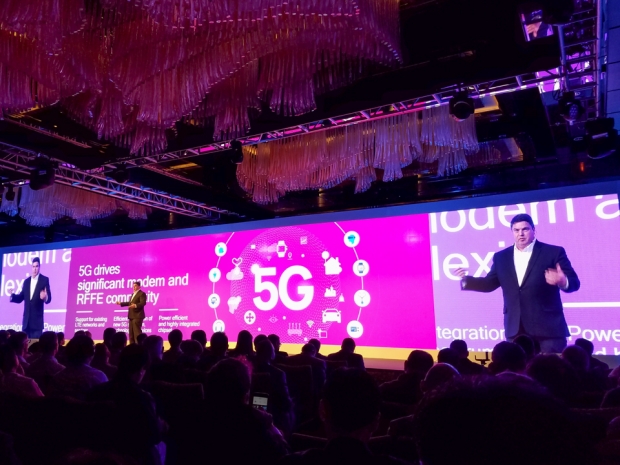 20Gbps speeds at 500KM/h while traveling

Qualcomm CTO Matt Grob has promised exciting times with 5G, with speeds up to 20 Gbps, and gave us a lot of examples about what will change when the networks become available.

The first thing, of course, is that the internet speed of a connected device is going to get faster, much faster. Qualcomm just announced Snapdragon X50, the world’s first 5G modem, that will start with speeds up to to 5Gbps. Things will get faster in the future as Matt sees the speeds increasing to 20Gbps with time.

The first field trials are expected next year, and Qualcomm’s Snapdragon X50-powered devices should surface in 2018. This is just in time for the South Korea Olympics that is expected to be one of the first massive-scale trials.

Matt also explained that with 5G, you will only need a few seconds to download a 4K movie. Don’t worry about your data caps, as they will definitely increase. Not to mention, some telecoms and carriers already have some sort of semi-unlimited plans in place. He even mentioned that the technology will work at some incredible speeds of 500Km/h (310Mph), which will prove useful for high-speed rail transportation.

The new 5G networks will support up to 100,000 people in one city block to use video services concurrently. The USA Super Bowl is a great example of how data consumption doubled from 2015 to 2016, as people like to show to their friends how special and super cool they are eating overpriced hot dogs and drinking super overpriced beer. Cisco claims that demand for data is always increasing and it will continue in the future. Today, you have Facebook and YouTube Live and brat how cool you (think you) are in real time. Demand for data continues to grow.

In order to increase the speeds, you need to use new technologies such as millimeter waves, high-density antennas, higher GHz, and MIMO. Some of these technologies are already being implemented in 802.11ad that is part of Snapdragon 820 / 821, and it will only get better with future products.

Qualcomm is already demonstrating mmWave in the 28GHz band and is conducting testing of indoor / outdoor handovers of what we will end up knowing as 5G. They are doing the testing and all this work today, and things will get better.

For the most part, mmWave devices pack 100s of antennas in a small package and can do massive MIMO with more spectrum above 24GHz while reducing cost per bit too. For first-generation 5G, however, Qualcomm wants to start in the sub-6GHz range with a technology it is calling 5G NR before moving to mmWave spectrum. The company has a presentation from June on the promise of 5G using mmWave technology that can be found here.

IoT wont only be for consumers, Facebook VR, or 4K and 8K video content consumtion. It will also be used in hospitals where low-latency and security for data will enable doctors to access patient data faster.

It will also reach connected and autonous cars, IoT in houses or connected cities, mission critical control centers, and will enable medical telepresence. It should increase public safety and let the first responders automatically direct personal drones from bush fire affected areas. There will be many use cases similar to that one. 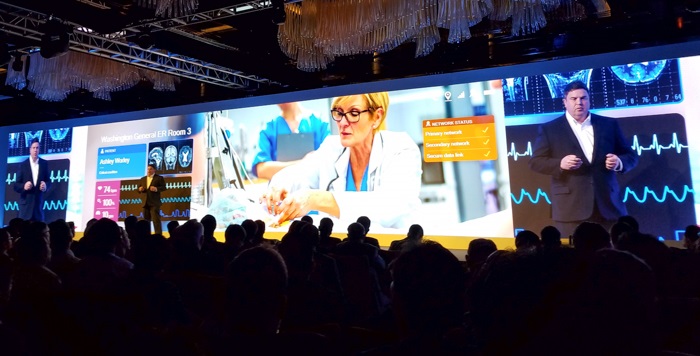 The rollout of 5G networks should enable massive IoT connected cities, industrial areas, and simiar areas to connect billions of electronic devices that can sense and measure their environments. Massive IoT expansion will lead to 100 bilion small intelligent sensors in different connected devices and 5G is simply tailored better to support that.

5G will coexist with 4G LTE

Matt mentioned that 5G is going to coexist with 4G and even 3G and should last 10 to 15 years. 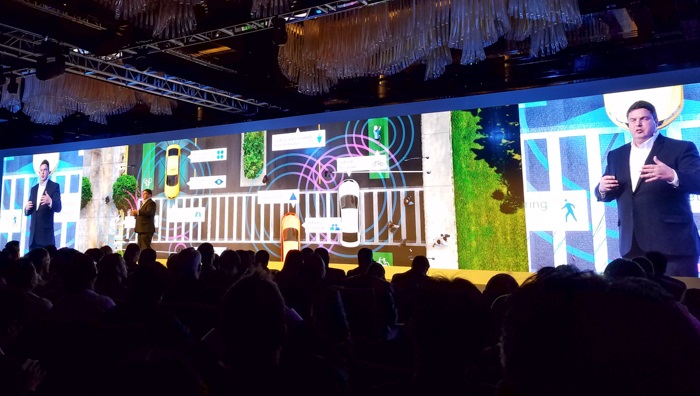 Coming back to connected cars, autonomous cars and self-driving cars with 5G modems will talk to each other using machine intelligence to somehow get us to our destinations safer. Networks using 5G technology have new features including platooning that should help increase vehicle safety. Basically, current laws allow some cars and trucks to drive at a safe distance from each other with features such as such as radar and cruise control. With 5G, an even narrower distance between cars and trucks can be achieved using vehicle-to-vehicle communication and connected control systems, while having another benefit of reduced fuel consumption. 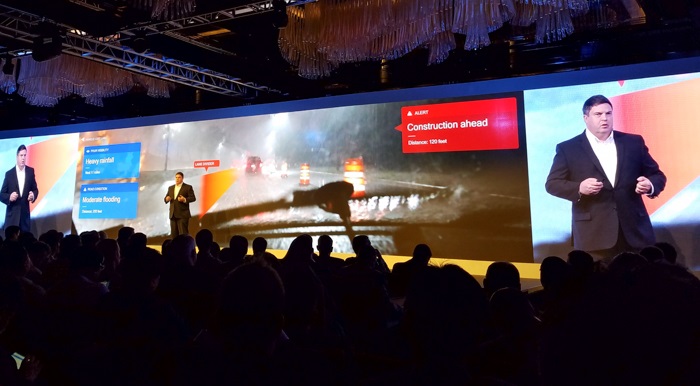 This should reduce the 35,000 fatalities in the USA last year, a hideous number that is actually 8 percent higher than in the year before. Can this be related to people looking at their phones rather than paying attention to the street?

With 5G networks, connected vehicles might notice problems such as road blocks or construction work before you do, and by sensing obstacles in its path, a vehicle can start breaking a few moments before. A vehicle can also warn other connected cars around it.

5G networks will be complex, but it will work

Matt mentioned that 4G LTE was very complex as you had 2,000 variants between different carriers, bands, frequencies and features. Things will get more complex with 5G, but Qualcomm plans to make it all work. You can expect that every spectrum will get integrated low-power packages and bring us commercialized 5G devices on a global scale.

There will be a lot of optimizations in the sub-6GHz range, and 5G will need new bands to support these exciting speeds and features. It looks like we are very close to the birth of 5G.

Last modified on 18 October 2016
Rate this item
(3 votes)
Tagged under
More in this category: « Qualcomm launches Snapdragon 653, 626 and 427 Samsung to compensate suppliers over Note 7 fiasco »
back to top