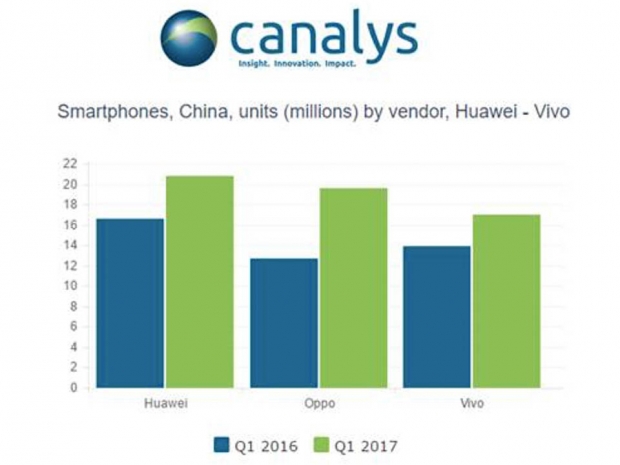 After staying in second place in the overall Chinese smartphone market for two consecutive quarters, Huawei has managed to overtake Oppo to retake the top spot in the region during Q1 2017, according to a recent report from Canalys.

The multinational network and telecom company recorded 21 million smartphone shipments in the first quarter of 2017, giving it an 18 percent share of the broader Chinese smartphone market and outpacing Oppo’s shipments of just under 20 million units. Oppo had claimed the number one position since Q3 2016, particularly as Apple recorded its first annual decline. Meanwhile, Vivo now ranks in third place, with shipments of 17 million units. According to Canalysis, the top three companies controlled over 50 percent of all smartphone shipments in China during the first quarter.

Apple now remains stuck in fourth place in China’s market, and experts continue to warn that 2017 will remain a tough year for the company to pull back into the top three in the Chinese market. Xiaomi, which now ranks fifth behind Apple, has just introduced its mid-range Mi 6 smartphone for $360 that puts serious pressure on the now-aging iPhone SE ($399).

Huawei is set to introduce its P10 Lite handset next month, which offers very competitive specs for just $386, and includes many of the better features found on its premium P10 and P10 Plus models.

Huawei in process of approving phones in US with AT&T

It will be a true sign of market leadership if Huawei is able to maintain its number one spot to Oppo and Vivo over the next quarter. These two companies are both owned by Guangzhou-based company BBK and have recently developed not only a strong presence in China, but also in a number of carrier-led markets including Taiwan, Singapore, Australia and New Zealand. Recently, rumors have hinted that Huawei is in talks with AT&T for a partnership to bring its phones to the US. The Information says the company is in the process of getting its homegrown Chinese mobile chipset, the HiSilicon Kirin series, accredited by AT&T for distribution in its retail stores. 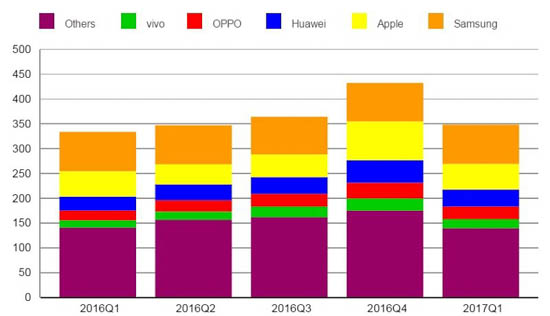 For now, firms like IDC expect continued worldwide growth from Chinese smartphone vendors like Huawei, Oppo and Vivo, as well as an expansion of sales in mid-range models.

Last modified on 28 April 2017
Rate this item
(0 votes)
Tagged under
More in this category: « Fixing broken Galaxy S8+ screen is expensive Google flaunts its photography skills »
back to top