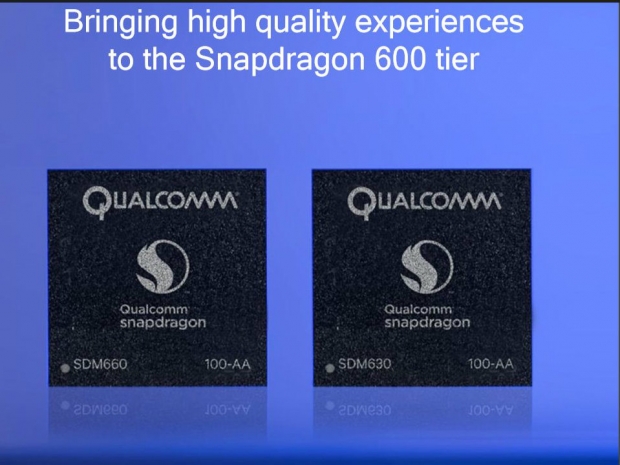 14nm and Kryo for mainstream

Qualcomm has gained a lot of momentum and managed to gain market share in the mainstream from MediaTek and others and the company has just announced the Snapdragon 660 and 630 that will help it to succeed in the future. 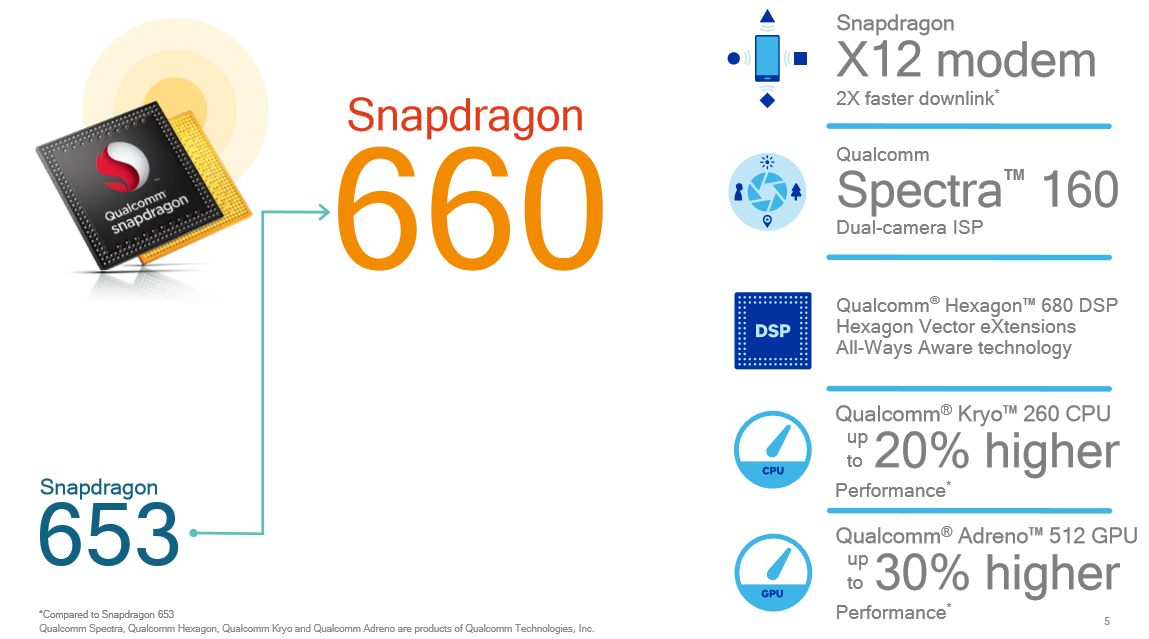 The GPU got a real boost - you can expect to see 30 percent faster performance from Adreno 512 compared to a Snapdragon 653 GPU.

The new mainstream SoC supports Snapdragon X12 modem with Cat 13 uplink and Cat 12 downlink support. Mainstream phones powered with this SoC will be able to match iPhone 7 top modem capabilities with speeds of up to 600 Mbps download and 150 Mbps upload.

The modem supports 3x20 MHz carrier aggregation, 256-QAM and up to 4x4 MIMO on one carrier.

On the uplink side, it supports Qualcomm Snapdragon Upload+, 2x20 MHz carrier aggregation, up to 2x 75Mbps LTE streams, 64-QAM and uplink data compression. Bear in mind that the Snapdragon X12 was first time revealed with Snapdragon 820 phones, and just one year later, this top speed technology is reaching mainstream phones. 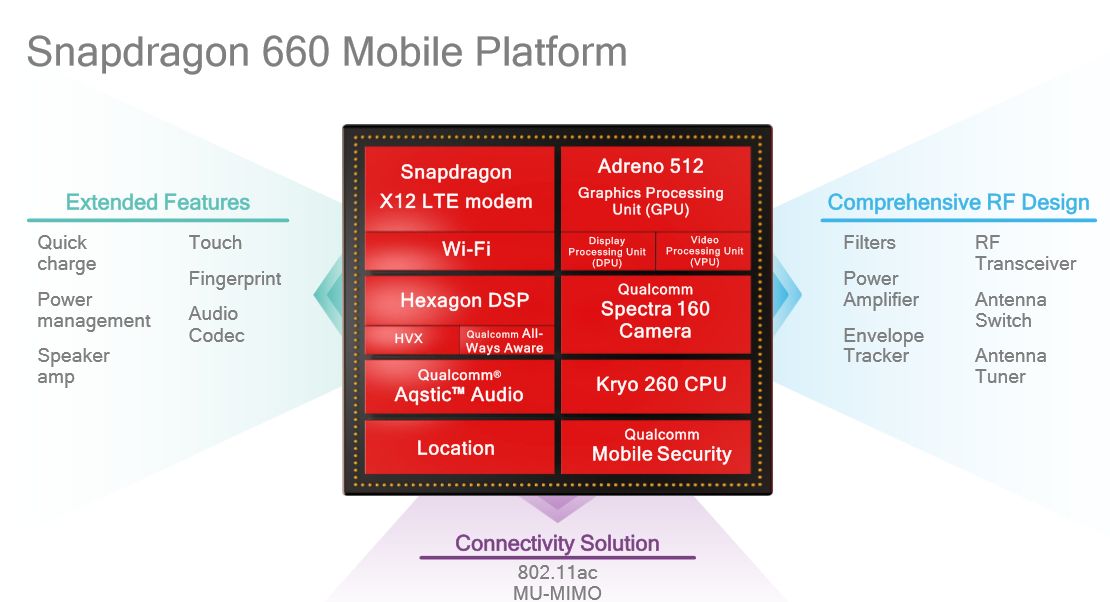 The Hexagon 680 DSP will help out in machine learning algorithms as it includes  Snapdragon Neural Processing Engine SDK support.  Machine learning and a SDK support is getting to the mainstream phones with TensorFlow and Caffe/Caffe2 frameworks support on Snapdragon 660 / 630 Hexagon DSP. Optimized software libraries include support for TensorFlow and Halide. Both platforms also support Qualcomm All-Ways Aware technology with support for the Google Awareness API.

Quick Charge promises to charge your phone safely, much faster than before. Taking this standard to the mainstream will speed up  adoption.

This is, again, the first mainstream chip to support the Bluetooth 5.0

The Qualcomm Snapdragon 630 also comes with Snapdragon X12 modem as well as Spectra 160 ISP but it has a modified Hexagon 642 with all aware technology. This is another octa core with four cores clocked at 2.2 GHz and four cores based on Cortex A53 clocked at 1.8 GHz. 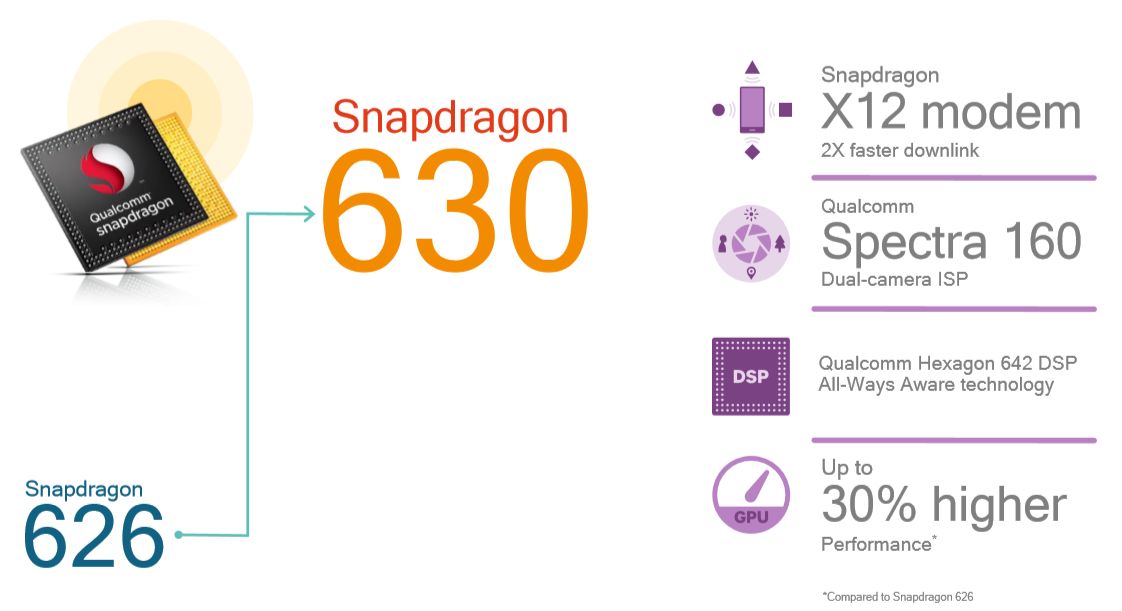 It comes with Adreno 508 that should be 30 percent faster than the Adreno with Snapdragon 626. The SoC supports 8 GB memory with 1333 MHz speed LPDDR4 as well as Snapdragon X12 modem.

The Snapdragon 660 is expected to ship to partners now while the Snapdragon 630 should start shipping toward the end of the month. You can expect to see them in the phone in the next quarter. These two are really stepping up the manistream game.

Last modified on 09 May 2017
Rate this item
(0 votes)
Tagged under
More in this category: « Samsung caught using different storage chips on Galaxy S8/S8+ Google could dump Linux for Magenta »
back to top