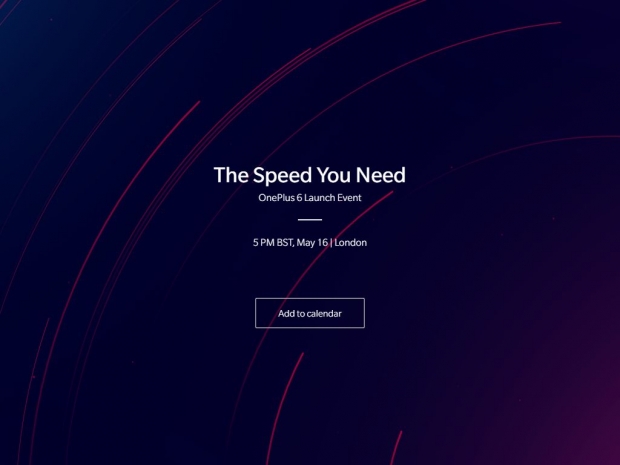 Launching on May 16th in London

OnePlus has sent  invitations for the OnePlus 6 launch event, that will be held in London on May 16th.

This puts the European launch event a day ahead of the one scheduled for China and India, which will be held in Beijing and Mumbai on May 17th.

The London event for OnePlus 6 should not bring many surprises as most of the specifications and features of the upcoming flagship smartphone from OnePlus have already leaked online, including the 6.28-inch 2280x1080 AMOLED screen, Qualcomm's flagship Snapdragon 845 SoC with up to 8GB of RAM and up to 256GB of storage space, and a 16+20-megapixel dual rear camera.

Like most recent flagship smartphones, the OnePlus 6 will also have a display notch but the company has promised it will be implemented better than on other smartphones.

Those eager to see the new smartphone can even attend the event and OnePlus reserved around 1000 tickets for fans priced at £16 in case you buy them before April 27th (£30 after April 27th).

OnePlus is trying hard to keep the details of the smartphone reserved for the launch event, so hopefully, there will be a thing or two that we haven't seen yet.

The pricing rumors are all over the place but most agree that the OnePlus 6 could be the first OnePlus smartphone with a price above $500, with some leaks suggesting it could go as high as $749.

Last modified on 15 January 2019
Rate this item
(0 votes)
Tagged under
More in this category: « Apple hacker outfit hacked Apple pulls back on booby trapped OS »
back to top