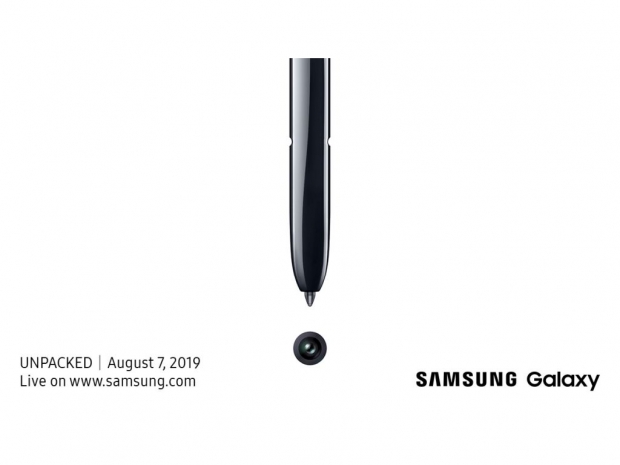 Galaxy Note10 as the star of the show

Although the cat was out of the bag earlier, Samsung has now confirmed its next Galaxy Unpacked 2019 event for August 7th, where we expect it to unveil the new Galaxy Note10 smartphones.

As usual, the invitation does not include a lot of details, but it does show an S Pen and a single camera, which lines up with earlier rumors that the Galaxy Note10 will feature a center-placed single punch hole front camera.

Earlier reports also suggested that we will see a total of three different Galaxy Note10 smartphones, including the Note10, Note 10+, and a 5G version of the phone. The larger Galaxy Note10+ and the Note10 5G will end up with a larger screen and a better rear camera configuration.

Since the invitation includes an S Pen, it is most likely we will see an improved version of the popular pen and there is a possibility that it might even come with a camera.

In any case, we will know for sure when the Galaxy Unpacked 2019 event kicks off on August 7th. The event will take place in New York, and it will be streamed at Samsung's official website.

Last modified on 02 July 2019
Rate this item
(0 votes)
Tagged under
More in this category: « Huawei waiting to see if it can use Android Apps ignore restrictions »
back to top