Poco rolls out the X4 GT and F4 smartphones 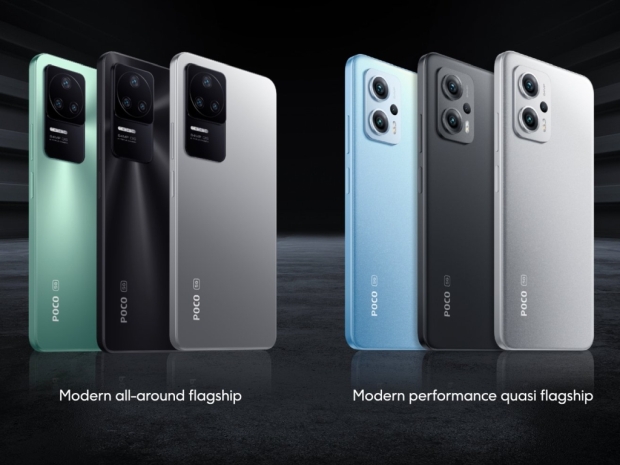 Poco has launched two new smartphones that will be a part of the 4-series, the Poco X4 GT and the Poco F4.

The bigger surprise is definitely the "gaming-oriented" Poco X4 GT with its flat-frame design, which packs quite a punch with Mediatek's Dimensity 8100 SoC, a TSMC 5nm octa-core SoC with four Cortex-A78 and four Cortex-A55 CPU cores, as well as the Mali-G610 MC6 GPU.

Earlier benchmarks showed that this mid-range chipset can hold its ground against Qualcomm's chips and Poco compares it to Snapdragon 888 in some games. Poco cools the Dimensity 8100 with LiquidCool Technology 2.0, with 32 percent larger vapor chamber and 7-layer graphite.

As it is a GT series Poco smartphone, is somewhat focuses on gaming, so you get a 6.6-inch LCD screen with 2460x1080 resolution (20.5:9 aspect ratio), 1 billion colors, and 144Hz refresh rate. Peak brightness is set at 650 nits, has support for Dolby Vision, and gets Gorilla Glass 5 for protection.

The camera was obviously not a primary focus, but it still comes with a decent triple-sensor setup with 64-megapixel main one (1/1.72”, 0.8µm), backed by an 8-megapixel 120-degree ultrawide one, and 2-megapixel macro sensor. The front camera is a 20-megapixel one. 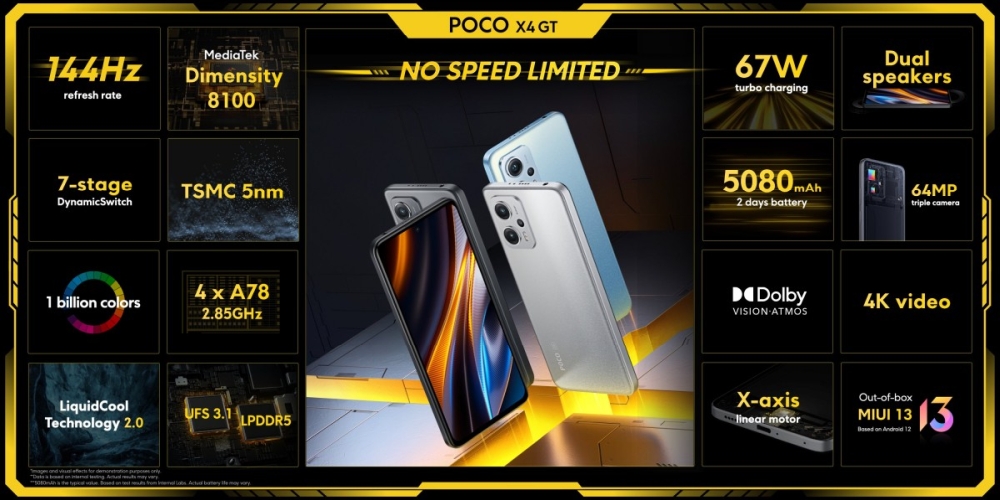 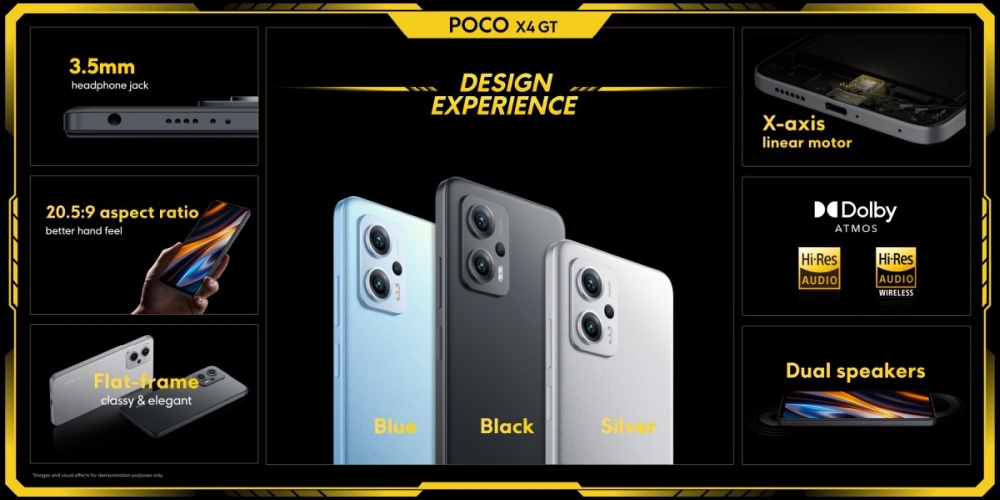 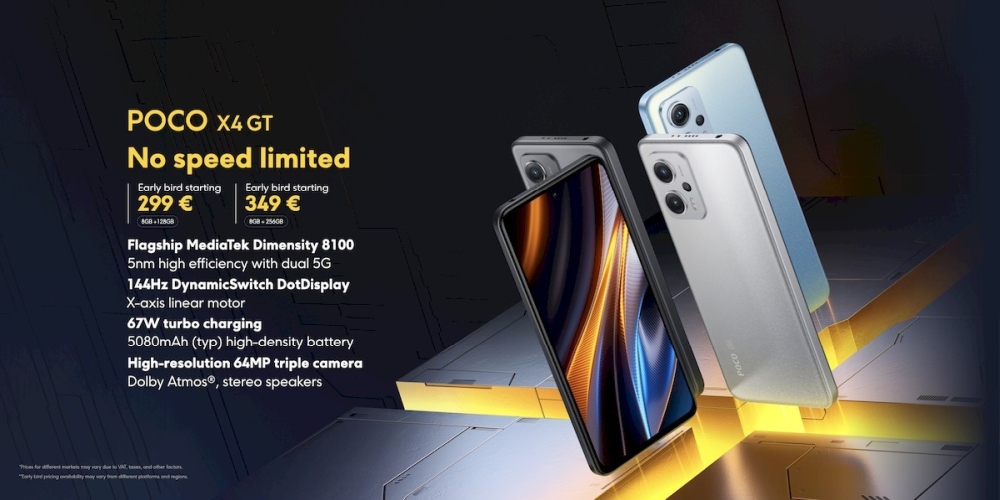 The Poco F4 focuses on slightly different things, bringing AMOLED screen and "flagship-level" camera with OIS (which is a first on the Poco line), but sticking to 7nm Snapdragon 870 SoC.

While the display is the same as the last year Poco F-series, it is still a rather good 6.67-inch AMOLED screen with 2400x1080 resolution and 120Hz refresh rate. This is a HDR10+/DV screen with 1,300nits of brightness and gets the same Gorillla Glass 5 protection.

The camera system, which Poco advertises as flagship-level, is the first Poco smartphone to get Optical Image Stabilization (OIS) and we are looking at a triple sensor system. It features a 64-megapixel 1/2”, 0.7µm sensor placed behind an f/1.79 lens, and backed by an 8-megapixel f/2.2 ultrawide one and 2-megapixel f/2.4 macro camera.

The rest of the specs include 4,500mAh battery with 67W charging, WiFi 6, LPDDR5 and UFS 3.1, LiquidCool Technology 2.0, side-mounted fingerprint sensor, dual-speakers, and more. 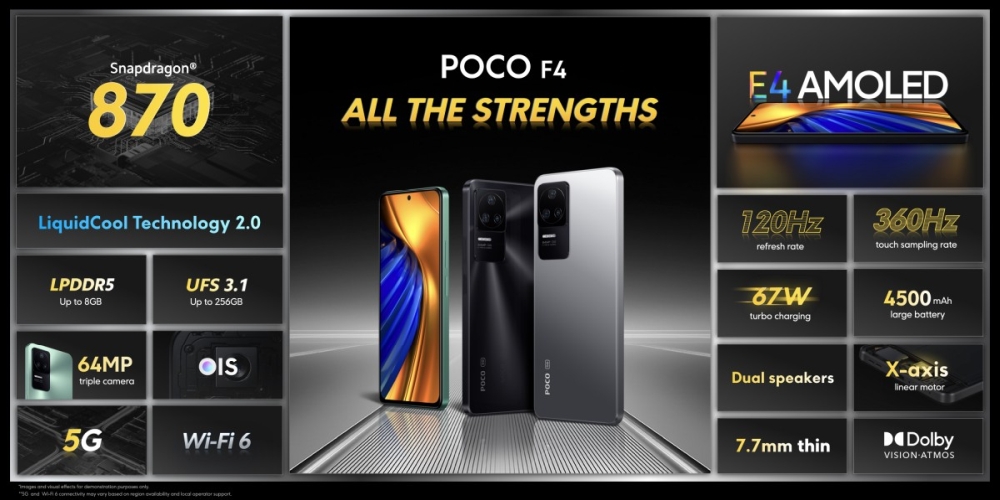 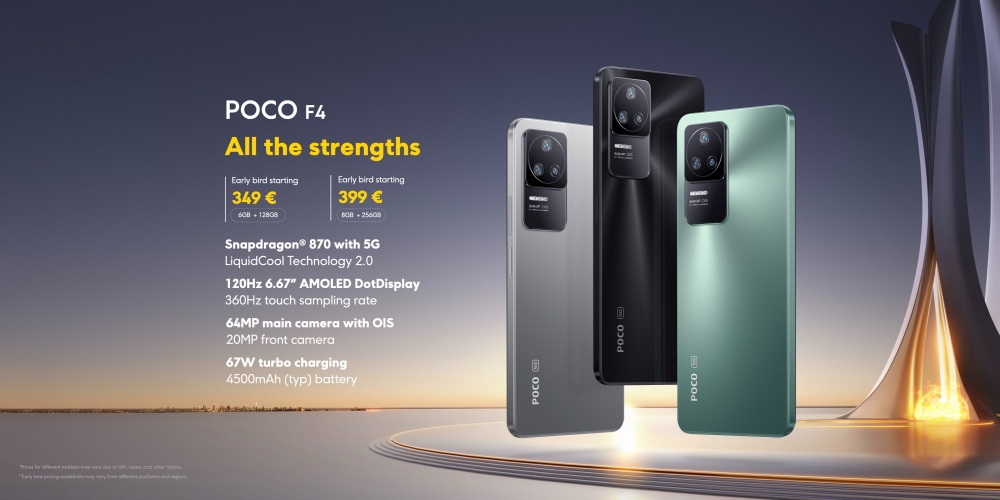 Rate this item
(0 votes)
Tagged under
More in this category: « Nothing phone (1) design unveiled Samsung announces 200MP ISOCELL HP3 sensor »
back to top