The Nighthawk X6 AC3200 has a unique design with six high-performance antennas and three network bands, one 2.4GHz and two 5GHz. It can deliver up to 3.2Gbps (1300+1300+600Mbps). It also balances the network load in order to ensure best possible WiFi performance for each device as well as deliver the maximum wireless range available today.

Based on a 1GHz dual-core processor with three additional offload processors, the Netgear Nighthawk X6 AC3200 should offer impressive performance. It also features the innovative 5G WiFi XStream technology from Broadcom, Beamforming+ feature which improves range reliability, Smart Connect, VPN support, ReadyShare Vault which is a free software application for backup and Netgear MyMedia, Genie and iTunes server. According to Netgear, a typical dual-band router has to "time-share" the 5GHz band when it streams video or Internet games while the Nighthawk X6 tri-band router can spread them on each of the two 5GHz bands. 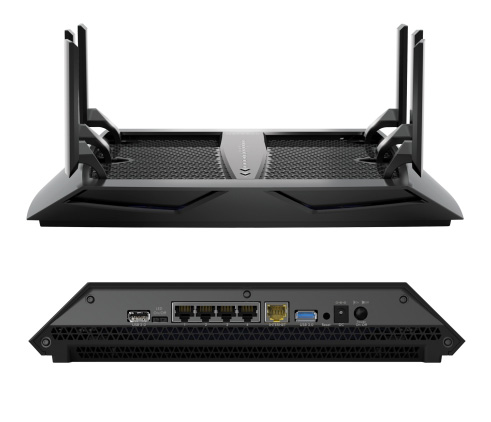