AMD’s Piledriver rollout is all but complete. With Trinity in the mobile and desktop space, new 3300 and 4300 Opterons are bringing the new architecture to data centers.

But what’s next for AMD? Well things should be eerily quiet on the server front in 2013. Abu Dhabi, Seoul and Delhi/Orochi C should last throughout 2013 and even a good part of 2014. That’s when we can expect some major changes, as AMD transitions to 28nm and goes about transforming its Opteron lineup.

Future Low Power CPUs and APUs (as AMD calls them) should replace Dehli/Orochi-C in 1P and dense server markets, but AMD is also planning “Client APUs for market enablement,” and this sounds a lot like ARM-based low voltage parts. Of course, in the high end AMD plans to stick with big Steamroller cores, but mid-2014 is a long way off. 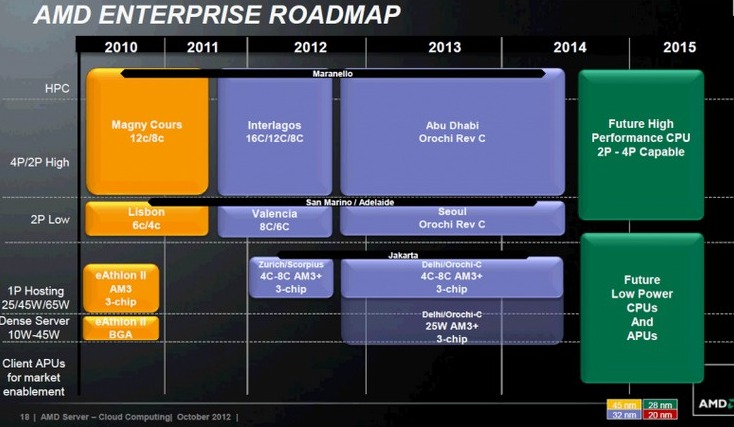 Rate this item
(0 votes)
Tagged under
More in this category: « Apple reportedly poaches TI engineers AMD FX 8150 and two more EOL in Q1 13 »
back to top