AMD has finally lifted the veil off its new AM1 platform. Although the first AM1 boards and processors went on sale a couple of weeks ago, the NDA was lifted just now. The pricing is now official, reviews are about to start popping up online and we have a bit more info on desktop Kabini parts. Sadly though, our sample is stuck at the local customs office, which appears to be staffed by Intel fanboys. 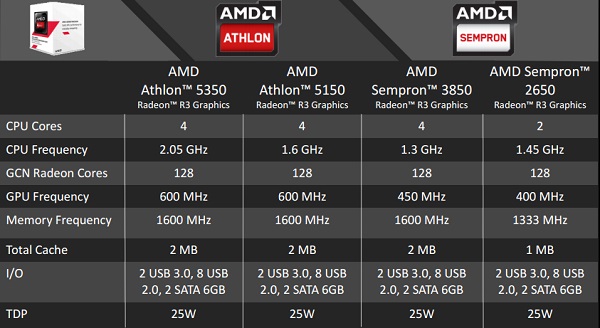 The cheapest AM1 processor is the dual-core Sempron 2650, at just $31. The quad-core Sempron 3850 is priced at $36, while the Athlon 5150 and 5350 cost $45 and $55 respectively. This is in line with expectations, as AMD’s target price for an entry level AM1 motherboard and processor is $60. In fact, we think the overall cost may end up even south of $60, since there the motherboards are somewhat cheaper than expected.

AM1 products will have to slug it out with Intel’s entry level desktop platform, better known as Bay Trail-D. Both platforms have something going for them. Bay Trail-D has a significantly lower TDP (10W vs. 25W), but AM1 comes out on top in terms of performance. In addition, AM1 is a socketed platform, so you can upgrade it when the time comes, or replace a faulty processor. With a Bay Trail-D board you can’t. 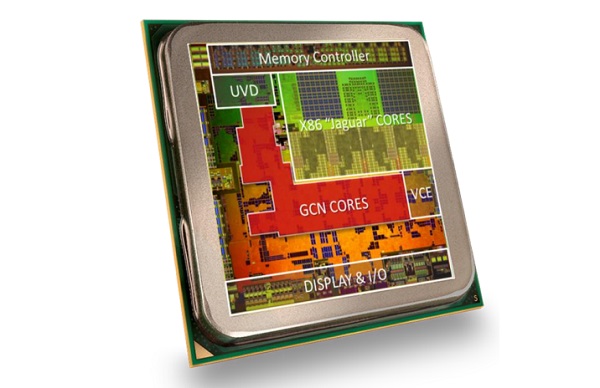 AMD also claims AM1 should end up somewhat cheaper than comparable Bay Trail-D products, namely the quad-core J2850, J2900 and the dual-core J1850/J1900. The fact that AM1 is reparable and upgradeable also adds a bit of value.

Despite its relatively low cost, AM1 does not lack much in terms of features. AM1 boards have more USB 3.0 ports than most Bay Trail-D boards and there’s no shortage of legacy connectors, either.

Faster than Bay Trail, not just in graphics

AMD APUs tends to offer superior GPUs compared to Intel offerings, so we expect nothing less from socketed Kabini parts. However, AMD usually lags behind in the CPU department. Not this time though. 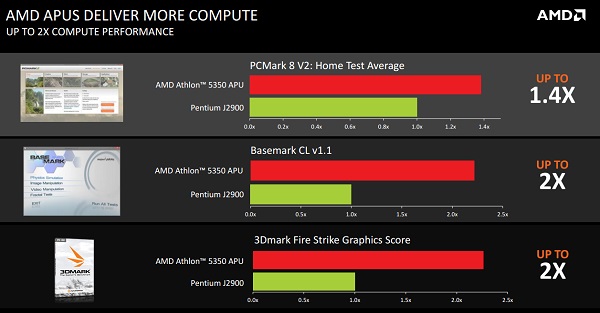 The Athlon 5350 also ends up faster in the Peacekeeper web benchmark, TrueCrypt and JPEG decoding tests.

In GPU and OpenCL tests Kabini wipes the floor with Bay Trail parts. In Cinebench’s OpenGL test it scores 13.78FPS compared to Intel’s 4.02FPS. In LibreOffice calc with OpenCL support it ends up faster by a factor of ten. 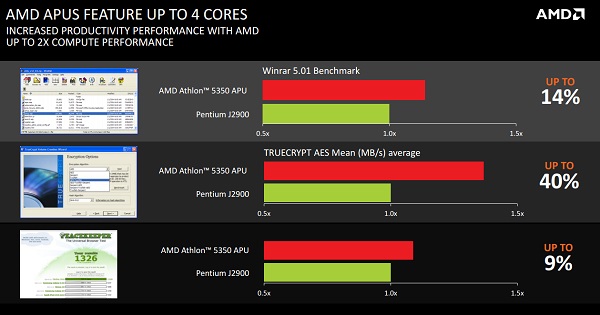 So far so good

As we pointed out in our brief AM1 review last week, we like the idea of a socketed entry-level platform. It makes a lot of sense in many markets and niches. Coupled with good pricing and performance, AMD should have no trouble attracting a wide range of customers, from enthusiasts who are looking for an affordable HTPC platform to average consumers, especially those in emerging markets such as China, India, Africa and Latin America.

We raised one concern in our review, if you can call it that – there are no aftermarket coolers for AM1 products just yet. However, AMD informed us that we should see some “interesting cooler choices” from Noctua and Streacom soon after the launch. This is good news for all those looking for silence, as we expect to see at least some passive coolers. In addition some AM1 boards feature a DC in connector and they will be happy to run off a passive brick charger.

Last modified on 09 April 2014
Rate this item
(0 votes)
Tagged under
More in this category: « Snapdragon 808 is Qualcomm’s 64-bit runner up Windows Phone 8.1 still Qualcomm exclusive »
back to top