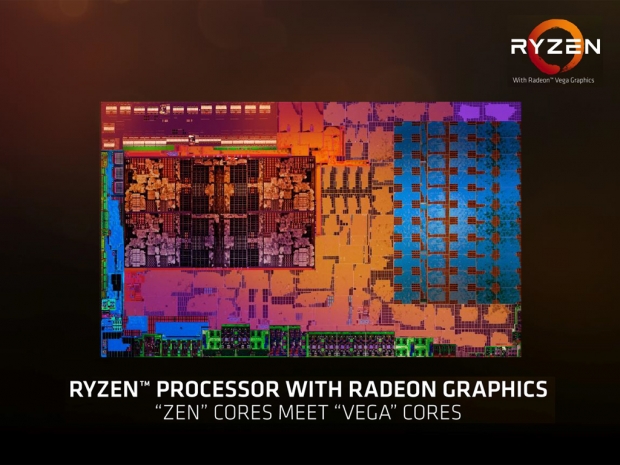 AMD has now made its Mobile Ryzen platform official, matching its Zen CPU architecture with Vega GPU architecture on a single die. The Mobile Ryzen lineup will start with two SKUs, Ryzen 7 2700U and the Ryzen 5 2500U, coming to notebooks and possibly other similar devices during the holiday season.

While desktop Ryzen, Threadripper and server EPYC CPUs and its RX Vega graphics cards have done a lot for AMD, which we could see from its latest Q3 2017 financial report, AMD has been missing the notebook platform which will take the best from both worlds and pack it on the same die, and that is where Mobile Ryzen comes in.

AMD Mobile Ryzen should also use up to 58 percent less power, allowing it to offer a much higher battery life, something that is quite important in the notebook market. 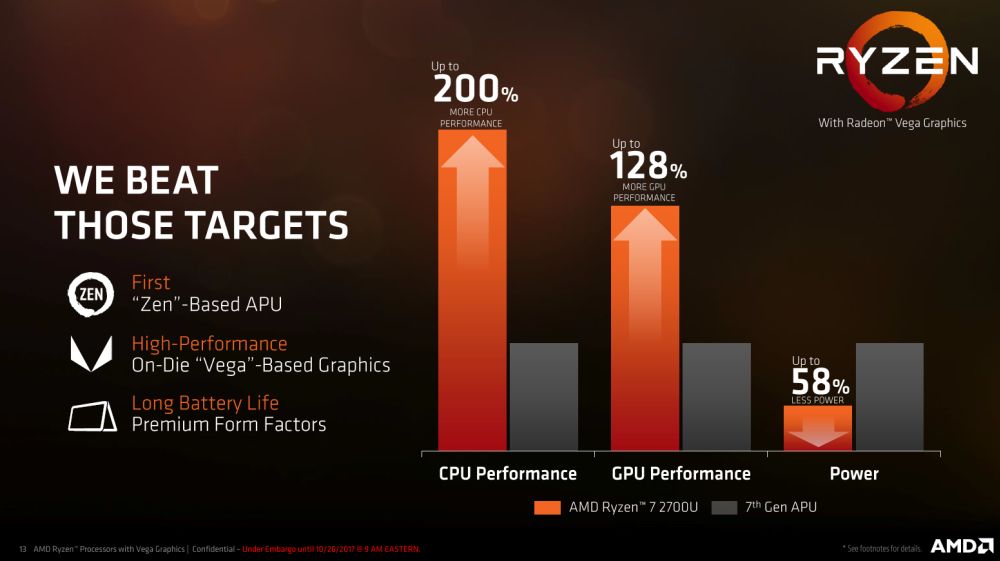 AMD Mobile Ryzen also brings a couple of new features, including the new Precision Boost 2 technology, which should "accelerate processor performance by using from one to many CPU cores", and the new Mobile Extended Frequency Range (mXFR), which is similar to the XFR on the desktop side and should raise the sustained performance in notebooks that offer better cooling performance.

AMD was quite keen to talk about the performance of its Mobile Ryzen APUs, comparing them not only to the previous generation AMD Bristol Ridge FX-9800P APU, but also compare it to some Intel parts, like the latest 8th generation quad-core Core i7-8550U. AMD obviously claims a win but bear in mind that these are AMD-made slides so we will wait for some real-world benchmarks. 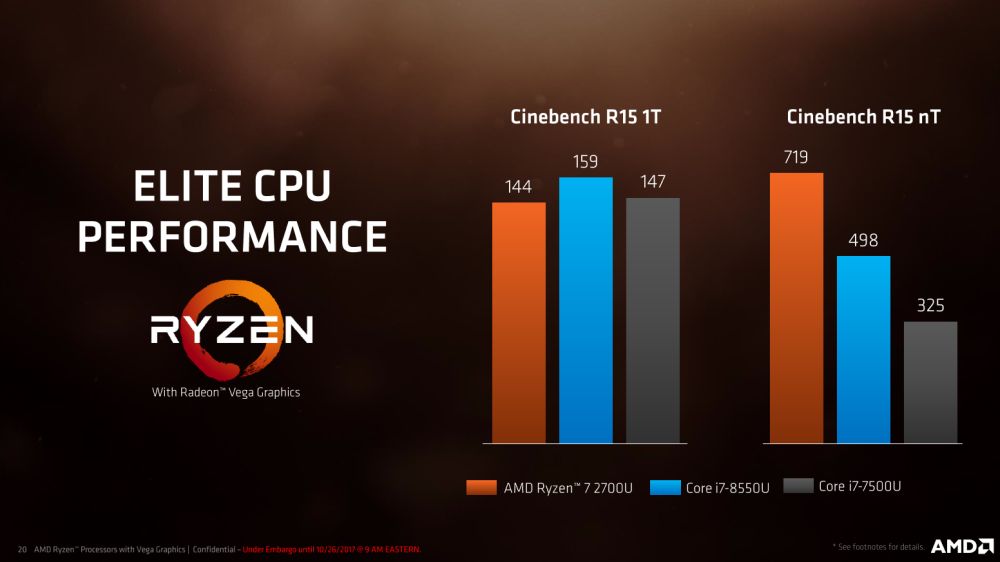 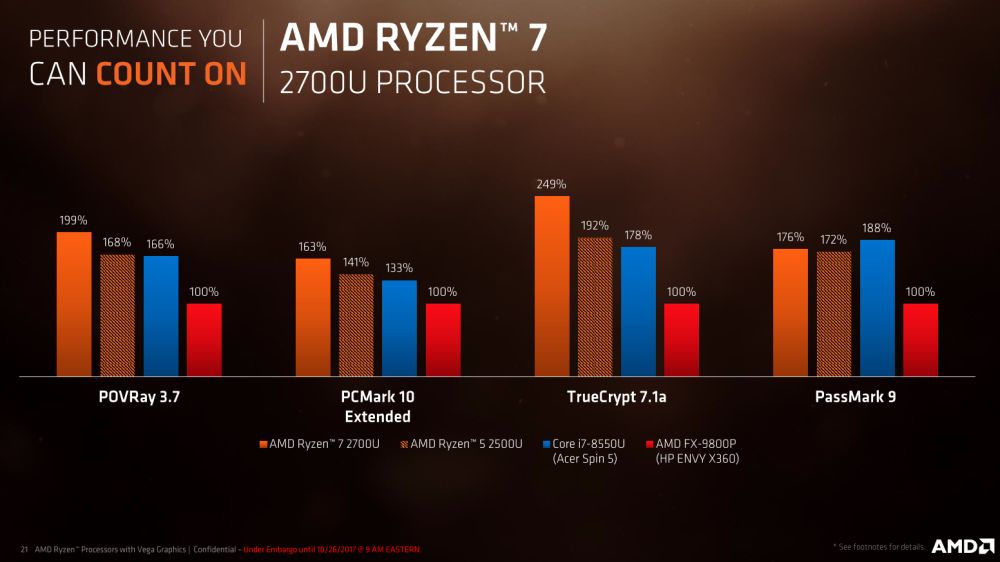 AMD also talked about gaming on Mobile Ryzen, showing some performance numbers and claiming that it can almost hit 60 FPS in most popular MOBA titles, like League of Legends and DOTA2, as well as 50 FPS in CS:GO, all at 1080p. Unfortunately, these are average FPS and you will need to drop graphics settings to medium or low in order to hit those targets and some games like Overwatch or Quake Champions are hitting an average of just above 40 FPS at 1280x720p resolution. 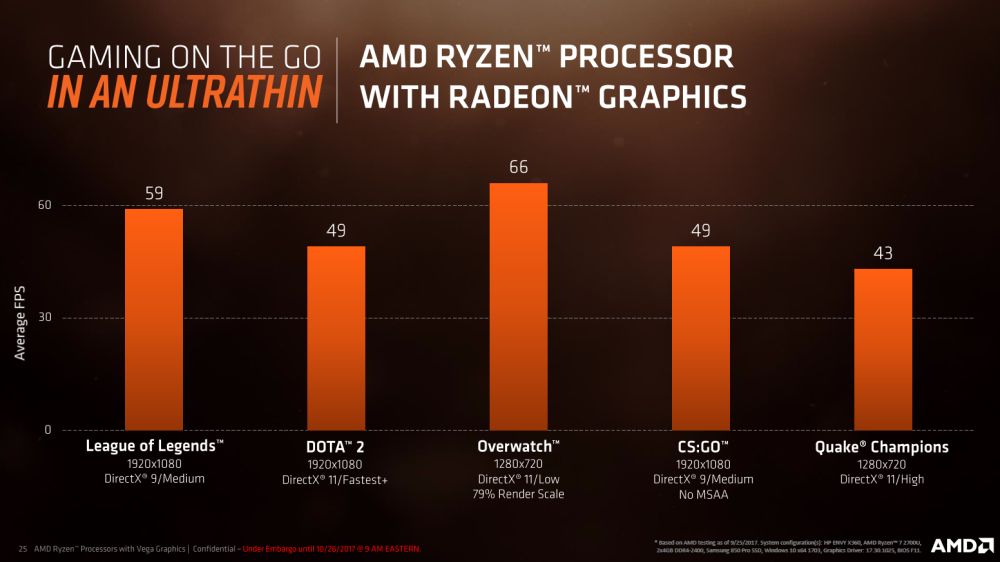 The Vega GPU inside the Mobile Ryzen APU also brings support for FreeSync HDR and 4K screens, as well as offers hardware video decode and encode with support for 4K streaming. 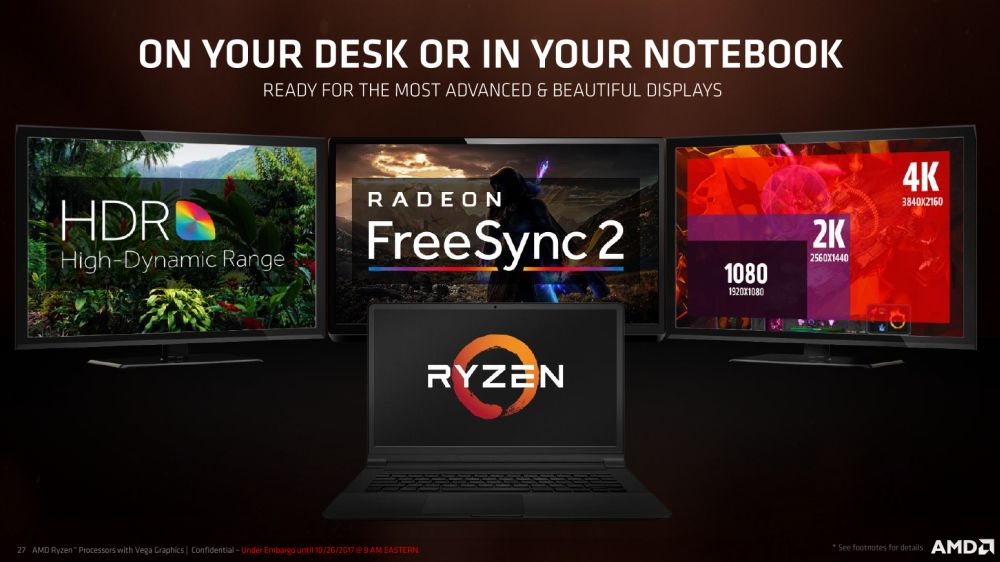 While many notebooks will be coming early next year, some partners like the HP, Lenovo and Acer should have their first Mobile Ryzen notebooks ready for this holiday season. HP will launch Envy X360, Lenovo will get its Ideapad 720s out and Acer will pack new Ryzen SKU APUs in its Swift 3 notebook. 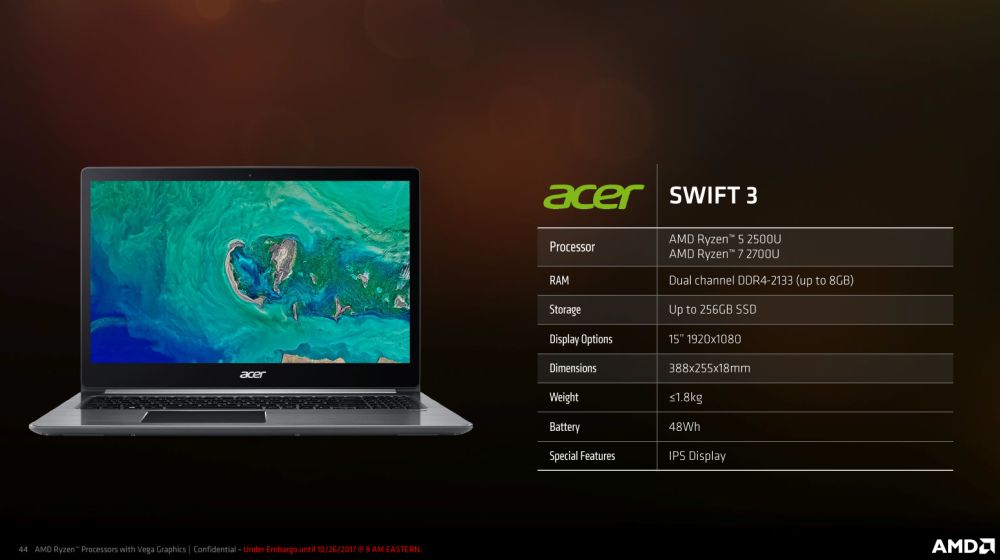 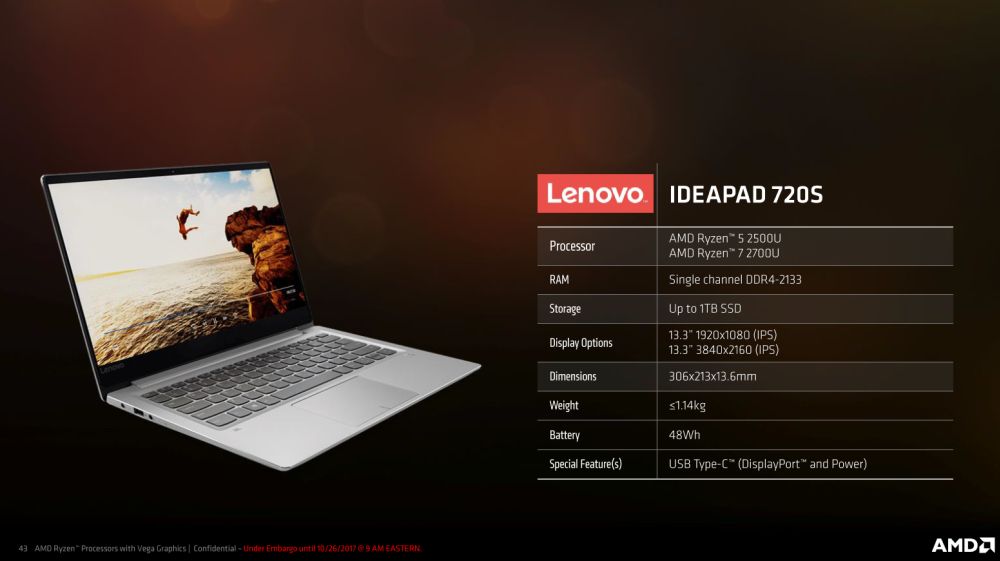 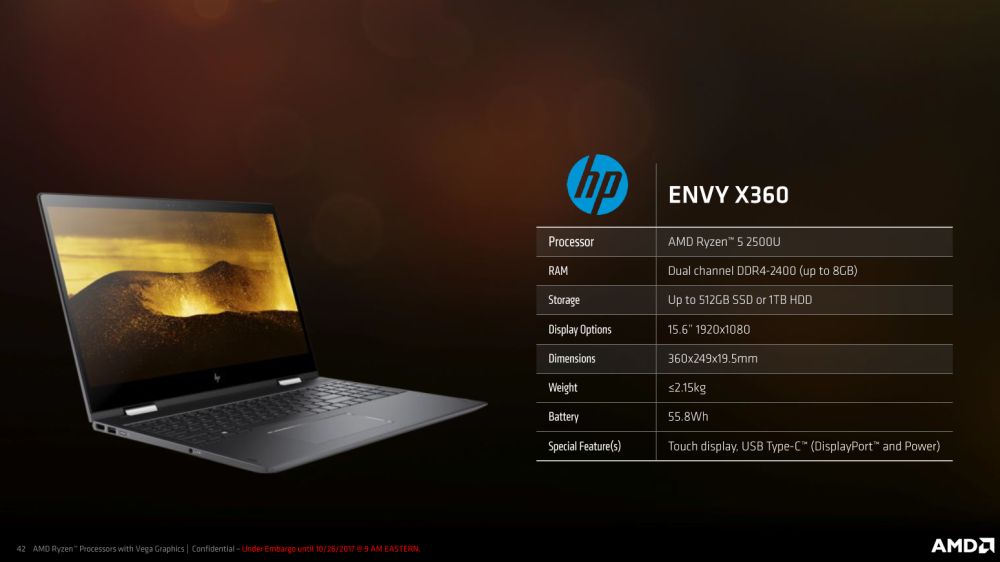 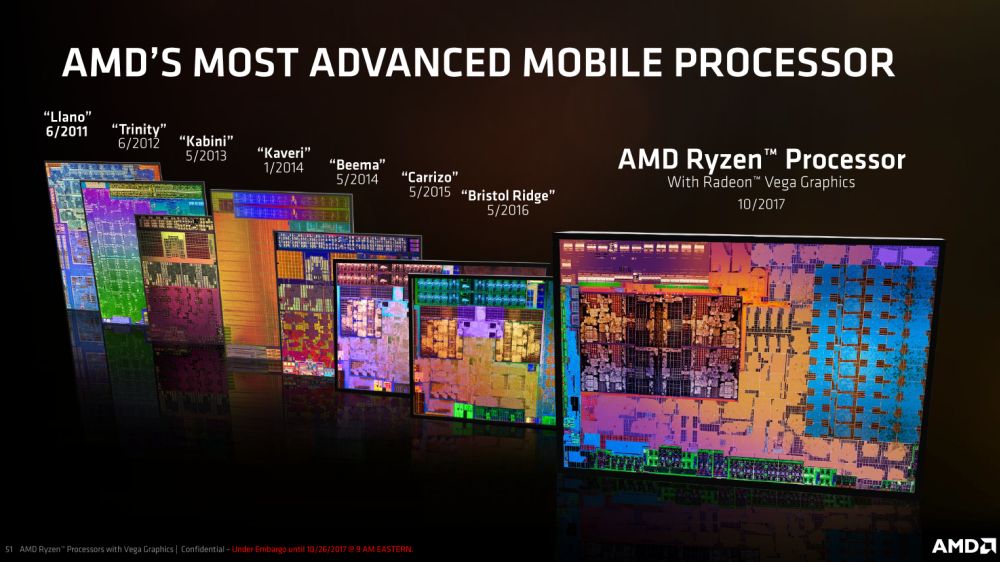 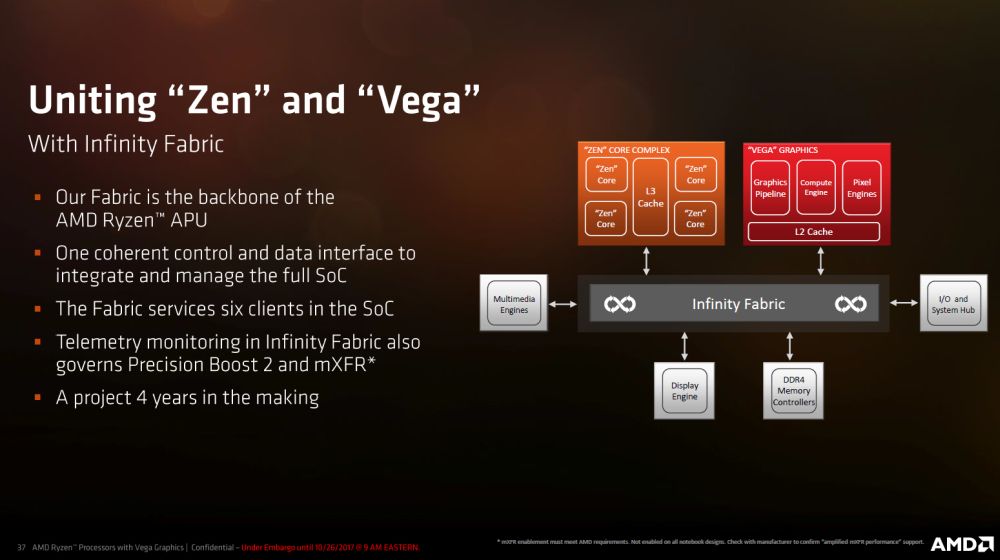