AMD gets in LTE bed with Qualcomm 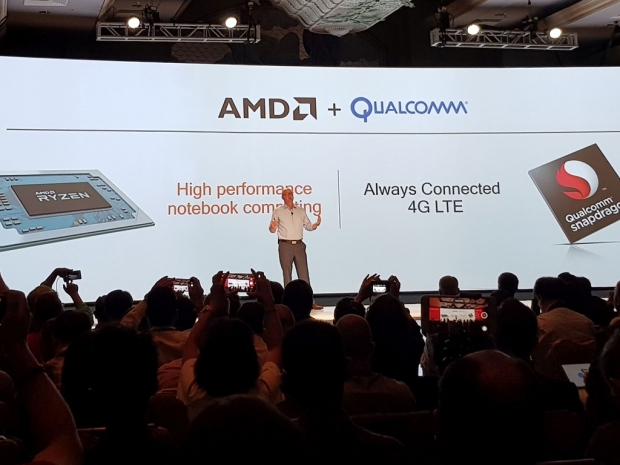 The enemy of my enemy

In a  surprising announcement, AMD’s Kevin Lensing took the stage here in Hawaii to announce that Ryzen Mobile will support Snapdragon GigabitLTE with its laptops.

AMD believes that always on laptops are the way to go, and since both Qualcomm and AMD are focused on competing with Intel, this partnership makes a lot of sense. Kevin Lensing is the Corporate Vice President and General Manager of the Client Business Unit at AMD.

Of course, Kevin took some time to gloat that AMD launched Ryzen, Threadripper, Vega, and Epyc and that it came back with a vengeance in 2018. Now with Ryzen mobile, AMD plans to have an LTE always connected Windows 10 laptop using Qualcomm tech.

Qualcomm claims that its GigabitLTE Snapdragon X16 modems will be featured in X86 laptops too. Kevin mentioned that the Snapdragon modem will be part of the development platform and you can well imagine that there will be devices supporting always connected Windows 10 on the market soon.

Next year is expected to be might when more notebook manufacturers  embrace the LTE always connected approach.

We expect to see more AMD based Ryzen laptops at CES in January.

Last modified on 06 December 2017
Rate this item
(0 votes)
Tagged under
More in this category: « Intel Coffee Lake spotted running on Z170 motherboard Tesla wants to build his own customised AI chips »
back to top