AMD StoreMI works like a charm on X470 chipset motherboards 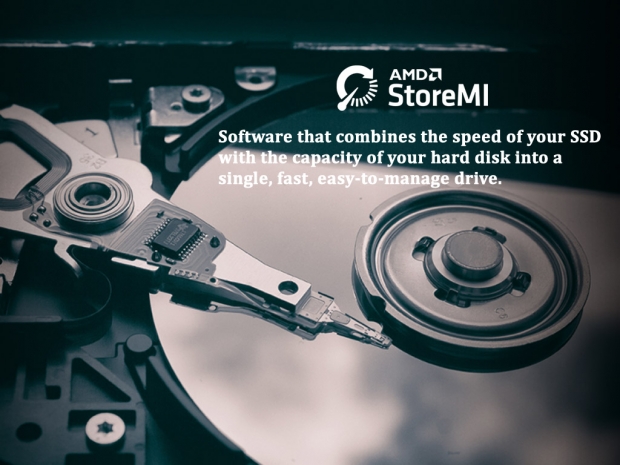 It even makes Intel Optane interesting

According to a video posted recently online, it appears that it took AMD and StoreMI software to make the Intel Optane shine and pretty much make the experience as best as possible.

Back when AMD announced the Ryzen 2000 series CPUs, it also briefly noted that X470 chipset motherboards come with free AMD StoreMI technology software, which allows you to combine an SSD with a large capacity HDD to give you the performance of the fastest drive in that combination. Apparently, the software is also available for free with Threadripper CPUs, according to the video.

The software promises near SSD performance levels by using "advanced machine intelligence, virtualization and automated tiering to analyze the data blocks that are most often accessed, and actually move those blocks to the fastest storage tier".

Bear in mind that this is not a caching solution but rather tiered storage, something that has been available in the enterprise market for some time.

There are some limitations, as with the free version of the StoreMI software  - one that does not need an additional license - you can combine up to 256GB SSD (NVMe or SATA) with any capacity HDD. In case you have RAM to spare, it can also create a 2GB DRAM cache as well. It also gives you an option to create a bootable or non-bootable virtual drive. The process is also reversible, which is a great feature as well, as you can go back to the original setup without losing any data.

According to a video hosted by Wendell from Level1Techs, which you can see below, the experience provided by StoreMI is great as it simply works, and works quite well. The video also explains the difference between different technologies like tiered storage and caching.

What makes the video interesting is the fact that the combined Intel's latest Optane 800P series drive with StoreMI software and AMD platform, which makes sense, as any Optane drive is practically pointless for using as a boot drive. Since the Optane 800p series, which is still way overpriced, offers impressive performance, combining it with a large capacity HDD and still retaining that performance simply makes sense.

Wendell goes ahead giving AMD kudos on creating such a solution and claims that AMD did a better job in creating an overall experience than the guys that created Optane.

Unfortunately, we do not have an Optane 800p drive around or AMD's X470 platform at hand to try it out but in case you are rocking one, feel free to try StoreMI out and let us know if the experience is as good as the video suggests.

You can also check out more information about the StoreMi software on AMD’s dedicated site or check out the Enmotus site for their version of the FuzeDrive for AMD Ryzen, which comes in Basic and Plus versions, priced at $19.99 and $59.99.

Last modified on 25 April 2018
Rate this item
(0 votes)
Tagged under
More in this category: « Ryzen 5 putting the fear of God into Intel Zen man Jim Keller leaves Tesla for Intel »
back to top