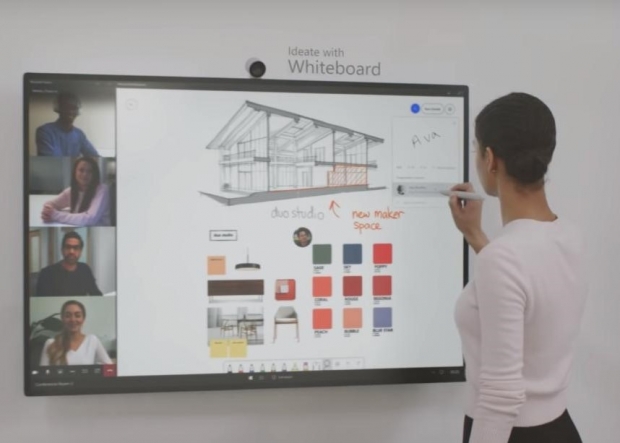 Software King of the World Microsoft has released its Microsoft Surface Hub 2S which, for nine grand, seems to be a rather expensive whiteboard.

However, it appears that most reviewers are impressed claiming that it will make all those pointless fishbowl meetings that management think are more important than actual work more productive.

It has a 50-inch screen with a 3840 x 2560 resolution and a 4K webcam - the Surface Hub 2S has everything you need to see up to four teammates at life-size all at once in full HD.

With an estimated battery life of around 100 minutes, the Surface Hub 2S should be able to make it through a whole meeting without being plugged in. Since the Surface Hub won’t shut off, you don’t have to worry about losing your work if you need to move the big screen around.

Microsoft’s Whiteboard app can automatically read your handwriting, and then automatically “beautify” it so that anyone you work with does not have to squint to work out if you were writing in Korean or just bad.

Another feature  can import a regular picture and then transform it into a digital drawing, as if it had been inked in the Whiteboard app.The Surface Hub 2S comes with Windows Ink support and an included stylus. It has a matte screen, which means there are fewer reflections.

While it is good collaboration tech, it will likely end up in the paws of companies with more money than sense. With a starting price of $9,000 for the 50-inch model, the Surface Hub 2S is a bit pricey particularly as you need Steelcase’s wheeled $1,450 Roam stand, which with its built-in storage area for the Hub 2S’ battery.

Last modified on 18 April 2019
Rate this item
(0 votes)
Tagged under
More in this category: « Student faces ten years for killer USB drive ASML says Samsung not involved in IP theft »
back to top