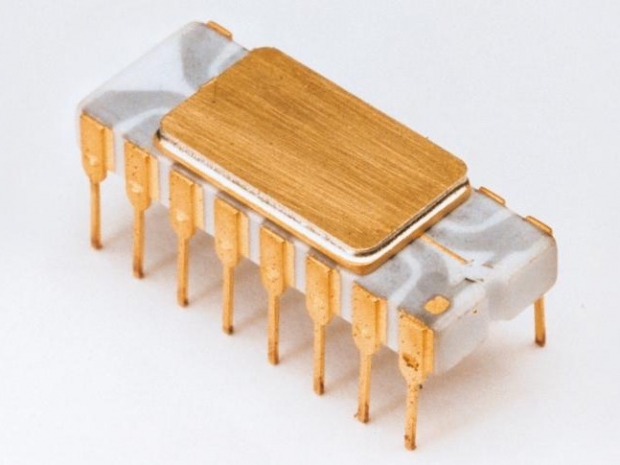 Tim McNerney the project leader at 4004.com, a site commemorating Intel's original 4004 microprocessor has pointed out that Intel’s 4004 chip was first released 49 years ago.

Even though Intel debuted its groundbreaking 4004 on November 15, 1971, 49 years ago today, in the pages of Electronics News, there is something about Intel's very first microprocessor that keeps inspiring engineers to pay tribute to this historic chip.

Turkish iPhone engineer, Erturk Kocalar now at Google and the force behind 8bitforce.com, just added this 4-bit granddaddy to his open-source lineup of 8-bit "Retroshields".

These elegant little adapters let you score your favorite, vintage microprocessor on eBay and actually play around with it without having to wire up a multi-chip memory and the peripherals needed to make your little "engine" jolly fun.

An Arduino emulates the rest of the system for you in software and lets you program and poke at your relic via USB from the comfort of a modern laptop.

Before FPGAs and yes, even before electronic CAD, there was a tradition of emulating hardware using software.

Busicom, a Japanese maker of mechanical adding machines, had designed its own electronic calculator chipset and eagerly approached the now famous Silicon Valley chip maker to manufacture it.

In 1969 Intel was just a baby hoping to obsolete core memory with commodity semiconductors, and it lacked extra logic designers on-staff.

Intel told Busicom that it would build a general purpose computer-on-a-chip and emulate your custom calculator architecture using a ROM-conserving byte-code interpreter. Busicom agreed, and Intel hired Federico Faggin away from Fairchild to craft a novel, customer-programmable microprocessor. In 1975, German mechanical taxi meter maker Argo Kienzle would go on to launch the world's first electronic taxi meter, starting to see a pattern of progress in everyday automation.