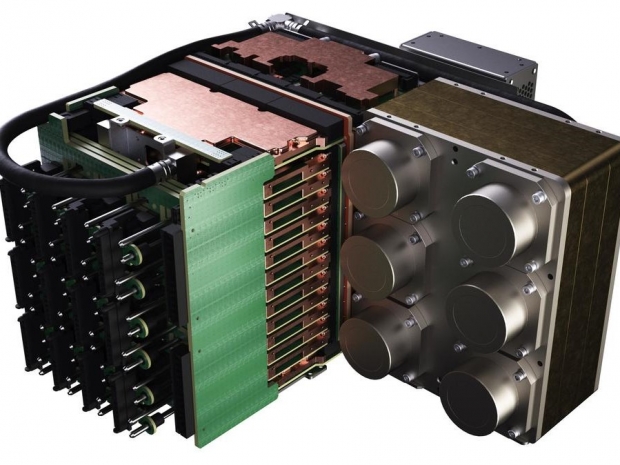 Cerebras Systems and the federal Department of Energy's National Energy Technology Laboratory announced that the company's CS-1 system is more than 10,000 times faster than a graphics processing unit (GPU).

On a practical level, this means AI neural networks that previously took months to train can now train in minutes on the Cerebras system.

For those who came in late, Cerebras makes the world's largest computer chip, the WSE.

Chipmakers normally slice a wafer from a 12-inch-diameter ingot of silicon to process in a chip factory. Once processed, the wafer is sliced into hundreds of separate chips that can be used in electronic hardware.

Cerebras, started by SeaMicro founder Andrew Feldman, takes that wafer and makes a single, massive chip out of it. Each piece of the chip, dubbed a core, is interconnected in a sophisticated way to other cores.

A single Cerebras CS-1 is 26 inches tall, fits in one-third of a rack, and is powered by the industry's only wafer-scale processing engine, Cerebras' WSE. It combines memory performance with massive bandwidth, low latency interprocessor communication, and an architecture optimized for high bandwidth computing.

Cerebras's CS-1 system uses the WSE wafer-size chip, which has 1.2 trillion transistors, the basic on-off electronic switches that are the building blocks of silicon chips. In comparison the  Nvidia A100 80GB chip, announced yesterday, has 54 billion transistors.

Feldman said in an interview with VentureBeat that the CS-1 was also 200 times faster than the Joule Supercomputer, which is No. 82 on a list of the top 500 supercomputers in the world.

The Joule Supercomputer used 16,384 cores, and the Cerebras computer was 200 times faster, according to energy lab director Brian Anderson.

Cerebras costs several million dollars and uses 20 kilowatts of power so it is not going to be powering your gaming rig any time soon.