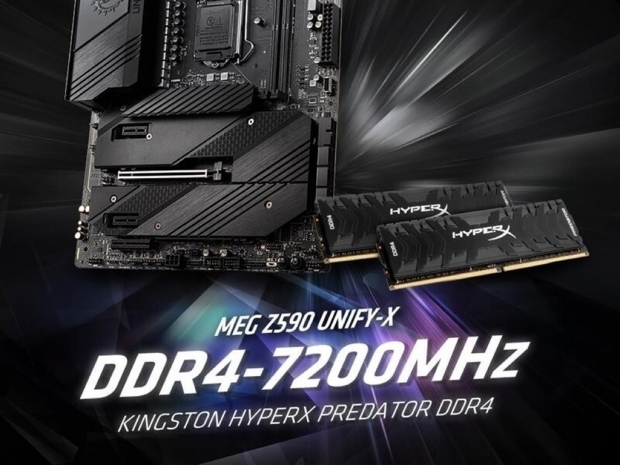 HyperX, the gaming division of Kingston Technology Company, has announced that its HyperX Predator DDR4 memory was used to set the new world record by hitting 7200MHz on MSI's MEG Z590 UNIFY-X motherboard.

The new record was posted over at HWBOT.org.

"HyperX is thrilled to be part of this breakthrough in DDR4 overclocking history, with HyperX Predator memory used to set two world records within the past month," said Kristy Ernt, DRAM business manager, HyperX. "Our HyperX engineers continue to focus on improving high-speed yields to get faster products in the hands of our customers and push previously unattainable performance records."

This is the same memory that previously held the 7156MHz world record for the highest memory frequency and the same HyperX Predator DDR4 memory can be found in frequencies reaching 4800MHz with CL12 to CL19 latencies and in 8GB to 32GB single modules or kits ranging from 16GB to 256GB.

Some of those HyperX Predator DDR4 kits can be found over at Amazon.com, and they even come in RGB options if that is your choice.

Last modified on 27 April 2021
Rate this item
(0 votes)
Tagged under
More in this category: « First Chromebook with Intel's Tiger Lake in the shops TSMC says its N2, N3, and N4 processes on schedule »
back to top