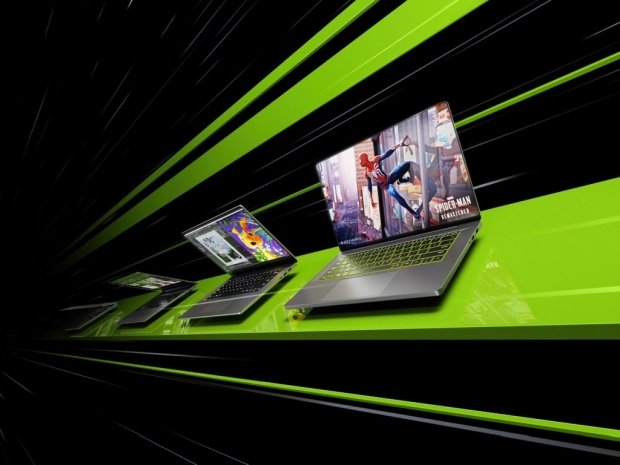 The full lineup of mobile GPUs

As expected, Nvidia has announced its full Geforce RTX 40 Mobile series for laptops at CES 2023, promising up to 3x higher power efficiency as well as bringing Nvidia DLSS 3 and 5th gen Max-Q to laptops.

Of course, bear in mind that these are nowhere near the desktop versions, but still pack quite a punch compared to the previous generation.

"With the Ada architecture, we set out to transform the performance and power efficiency of gaming and creator laptops," said Jeff Fisher, senior vice president of the GeForce business at NVIDIA. "The new RTX 40 Series delivers enthusiast-class performance in laptops as slim as 14 inches, a new milestone."

As said, the RTX 4090 and the RTX 4080 mobile graphics cards are aimed at flagship gaming and creator laptops.

According to Nvidia, the RTX 4090 Laptop and the RTX 4080 Laptop should provide significant performance improvements as well as livestream at 4K 60FPS with AV1 encoding, while creators can use VIDIA Omniverse platform for photorealistic, 3D virtual world building at 4K with fully simulated physics, lighting and materials.

When it comes to these three "mid-range" mobile GPUs, Nvidia is claiming the performance of RTX 4080 at one-third of the power, which is quite an impressive feat. It should hit an average of 80FPS at 1440p Ultra, most likely for the RTX 4070.

These laptops will be available as of February 22nd, starting at $999 for laptops with RTX 4050.

According to Nvidia, the 5th generation Max-Q technology should bring significant improvements in performance, acoustics, and battery life by up to 2x. DLSS 3 has been optimized for Max-Q as well, and Nvidia has been working with manufacturers to bring both the lowest voltage GDDR6 memory, as well as bring tri-speed memory control enabling the GPU to switch to newer, lower-power memory states dynamically.

The on-chip memory has been optimized for Max-Q, doubling the bandwidth, increasing the size by 16x and improving clock gating.

All of this should bring some rather powerful laptops in much more compact form-factors, with 14-inch laptops offering up to 2x the performance of Playstation 5, as well as 3D rendering in Blender or using AI tools in Adobe Photoshop or Premiere Pro.