Shuttle is a well-known name in the small form factor market. Shuttle invented the XPC, but in last few months it barely does any marketing or sampling of its devices. Well, despite that Shuttle still comes up with some rather unique devices.

We were lucky to get SG33G5M (D'VO Series) Digital Visual Opera device that comes with a nice LED display, media center remote control and ultimately a nicely designed case. It has enough places for two memory modules, DDR2 of course, PCIe slot for a discrete graphics card, PCIe 1x slot for some add in cards, a place for two hard drives and a DVD/HD DVD/Blu-ray devices. In theory, you should be careful if you want two hard drives, as it gets very hot if you put two of them on each other. With a previous model of Shuttle we managed to destroy one of the 750GB drives as we decided to put it on top of 500GB drive and this was simply too hot. You definitely want to have only one hard drive there. 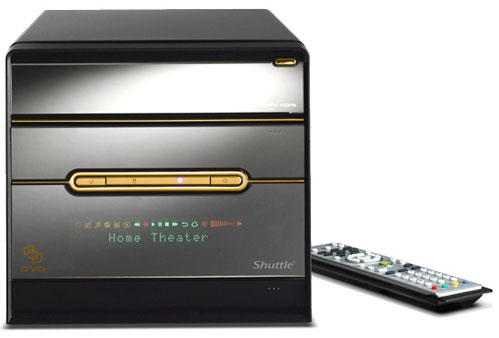 DVO is something nice and new. It is an LED-based display where you can see the computer temperature, the date and time or your custom message. You are limited by a number of characters but it will be enough to write www.fudzilla.com but not enough for www.whydoyouwanttovisitthissite.com.

Shuttle traditionally uses its heathpipe-based cooler that can easily help you overclock 2.66GHz based E6700 all the way to 3.2GHz. You wouldn’t even notice the temperature change, as Core 2 Duo even at 65nm is incredibly cool, even in a Shuttle XPC. In this test we wanted to concentrate more on the media center side of this machine. Most of people will either have it in the office at some visible place or in the living room. Remember, the point of a Shuttle machine is that it works well and looks even better.

Vista Ultimate has a media center edition and with an appropriate remote control it will create a nice viewing pleasure. The last remote controller that fulfilled my needs was the legacy one from All in Wonder cards called Remote Wonder, and the one that comes with the Shuttle fits most of the needs, but it doesn’t move the mouse. 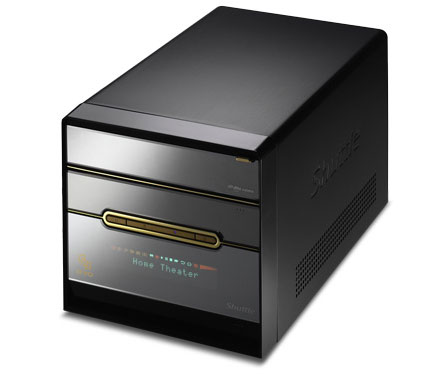 Shuttle still uses its proprietary heatpipe cooler that cools your PC just fine and it remains quiet at the same time. Putting a Shuttle together is fun and replacing a hard drive in installed machine is an adventure, as almost certainly it means that you have to remove the DVD first. We hoped that Shuttle will continue using the passive notebook like PSU, but this time the PSU is in the small chassis and it adds some noise to the machine. It is quiet, but it's not silent.

We installed Vista after benchmarking the system on XP, our reference platform. Vista looks and works quite good on this machine, and believe it or not, the hard drive is the noisiest component on the whole system. Vista has media center edition, at least in Ultimate edition, and we tried to play a while with it. After you get used to it, Media center edition is definitely something that can nicely play your DVDs, AVI files, pictures and music. It can also play and record a live TV but you need a TV tuner for that.

In the beginning Media center was crashing quite a lot without leaving any message why. After a lot of reading we learned that this is codec related, and once we got the codecs installed the program worked well. We had the codec even before it started crashing, but after getting the new G33 drivers and new codec pack everything was stable. The remote lets you navigate to all files and you can play music or videos and pause them, skip them replay them and many more. This works well and we like the fact that once you get on the couch you don’t have to get up to turn your movie on. 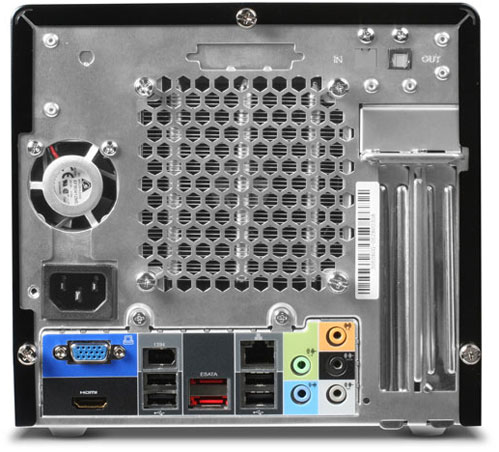 SG33G5M DVO has HDMI and VGA out and we connected a 32-inch panel via HDMI and everything worked really well, but Intel’s IGP driver was giving us some trouble. For some reason Intel’s engineers believe that dynamically setting the display at every boot is a good idea, so many times we ended up without a picture on the monitor and we had to turn the TV on to see the display and load the display settings via config file.

This is very user unfriendly, and this is definitely something that will force us to upgrade this system to a cheap passive Nvidia or ATI graphics card. G33 can play Videos, including HD 1080 content, at some heavy CPU load, but you can forget about games. This is not something that will play any games; but it’s cool for Aero and multi-media.

Shuttle performs really well. It works like many big boys, it looks astonishing as well, and DVO is something that will help you be creative where you can express yourself via this small display.

You can overclock a CPU to 3.2GHz, which is a nice achievement, and it won’t get significantly hotter. We like the remote and media center options but it takes you some time to get used to it. Shuttle does lack PS2 connectors for mouse and keyboard, so if you still have those make sure you upgrade mice and keyboard, as well. The machine has enough connectors and 1Gbit LAN and HD audio from Realtek will fit everyone's needs.

We believe Shuttle did a great job with this machine, but we would have liked it even more if the company used a passive cooling that we’ve seen on SD11 unit. The most painful thing is the price, as we believe that it’s too steep; but it’s not like you will have an option. You won’t miss any features, as it has it all.

It retails at around €330, but if you want a pretty and relatively quiet machine this will be one for you.