KFA2 is constantly working to improve its custom components and come up with cards capable of trumping the competition. The KFA2 GTX 780 Ti Hall Of Fame (HOF) is based on an altered GTX 780 Ti PCB design and of course it boasts a custom cooler on top.

Like Gainward and some other Nvidia partners, KFA2 chose to go with a triple-slot cooler. Since the cooler takes up a lot of room, it is not practical for three-way SLI rigs. Asus and EVGA used a different approach. Their coolers are oversized, too, but they are still dual-slot. We won't go into the finer points of their approach, but it must be noted that for the vast majority of users this will be a non-issue. Even a single GTX 780 Ti is fast enough for most gamers out there. Motherboard makers have also started producing boards with a bigger gap between the PCIe slots, allowing the use of triple-slot cards in SLI/Crossfire. 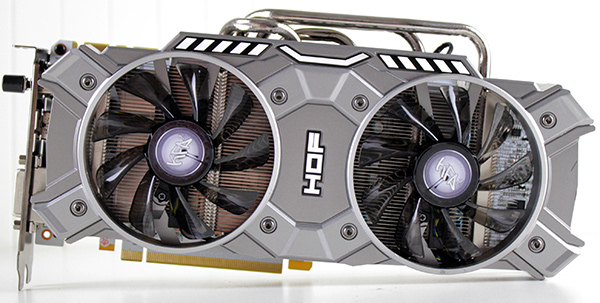 Previous generations of Geforce reference designs featured relatively noisy coolers, thus making non-reference cards with custom cooling much more appealing. However, the reference GTX 780 Ti cooler is pretty good, as it doesn’t trade noise fir performance, at least not until you overclock the card. Since an overclocked GPU generates more heat the reference cooler starts to reach its limit and the fan noise goes up. Nvidia says the thermal design for the reference GTX 780 Ti is 250W, however, due to a significant overclock, the HOF can probably go even more. We hoped that HOF's huge cooler will have no trouble keeping the card cool quiet - and we were right. 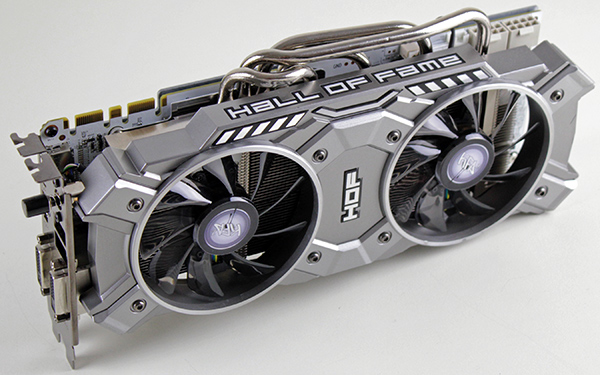 Both 8-pin power connectors are necessary to keep the card juiced up. Theoretically using two 8-pin connectors this card can draw up to 375W from the PSU. 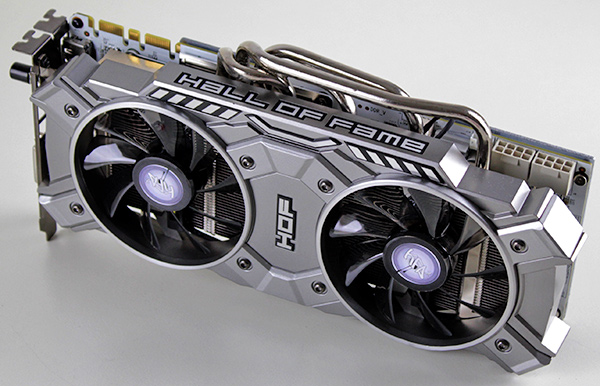 The cooler uses four 6mm thick, copper heatpipes that protrude out of the shroud. The PCB is white, but since the back of the card is covered by a big backplate, there's not a lot of PCB acreage to see. 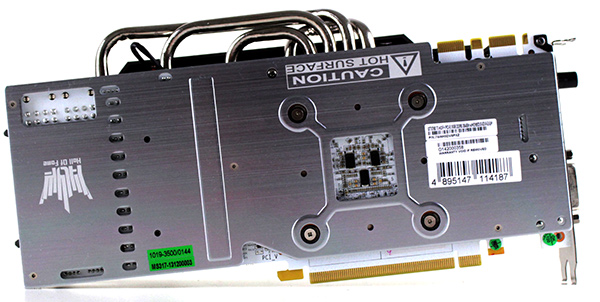 The card features two SLI connectors so it can be used in multi-GPU configurations, be it in standard two-card SLI, or 3-way and 4-way SLI. Of course, you need a lot of room for several triple-slot cards.

The GTX 780 Ti HOF features an oversized shroud and cooler, so the entire assembly is about 0.8cm longer than the reference card.