One of the motherboards recommended for use in the Hadron Air is the EVGA Z87 Stinger, which we used in our test. We also employed a Core i7 4770K processor, based on Intel's latest Haswell core, which is about to get a makeover of its own, in the form of Haswell refresh parts and Devil's Creek chips. As you can see from next images, we have a good reason to commend EVGA for the design – the  Hadron Air looks stunning. The top of the chassis features a neatly designed panel that allows hot air to escape at all times. 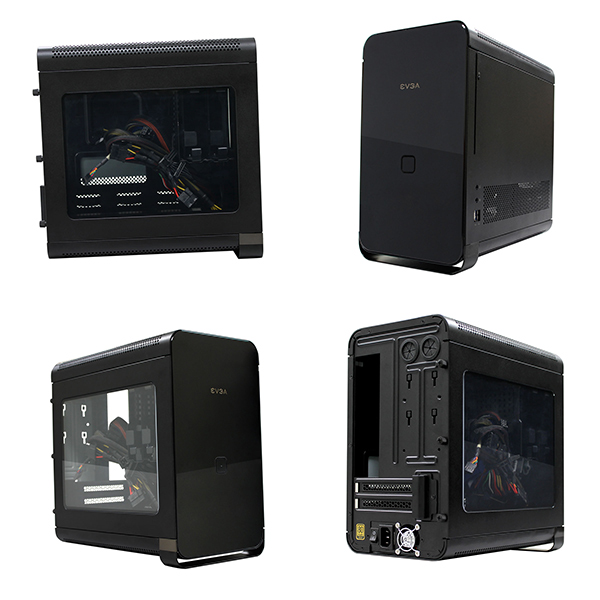 We were a bit concerned about fitting the triple-slot Hoff card into this diminutive chassis, but it proved relatively easy. There is enough room, but access is limited. To install a 20cm (8-inch) card, you have to insert it at an angle, with the I/O port facing forward, then twist it once the front is already in the chassis. The Hoff took up almost all the available room in the bottom of the chassis. 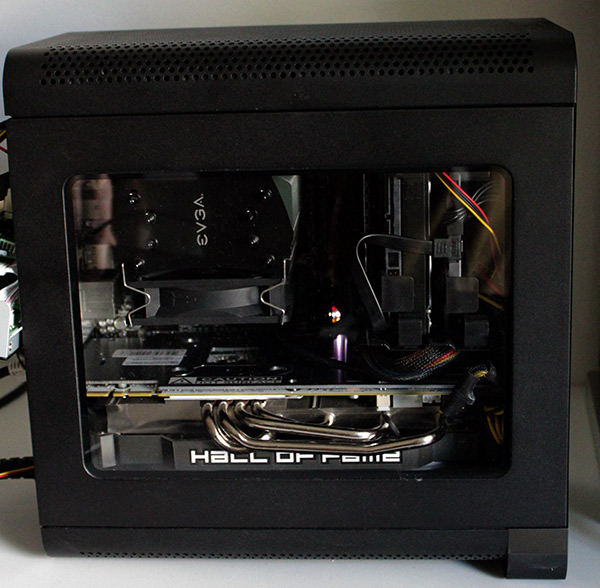 Interestingly, due to the relatively small size of the chassis and the window, the card looks even bigger and meaner than it would in big ATX tower. 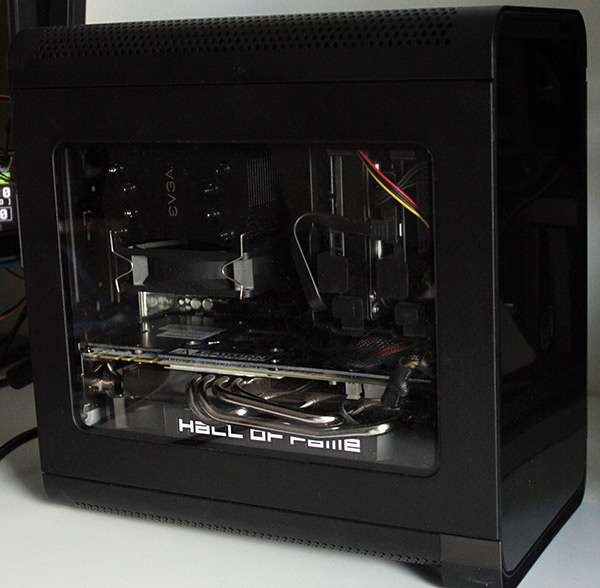 The next shot shows that it was a tight fit. There is just enough room between the card and the PSU to ensure those two components are not interfering, however there is not enough place for good airflow. Power delivery was not a problem as total consumption never gone over 374W. There's an integrated 500W Gold rated power supply unit with 40A on a +12V rail, which is enough for one GTX 780 Ti card. 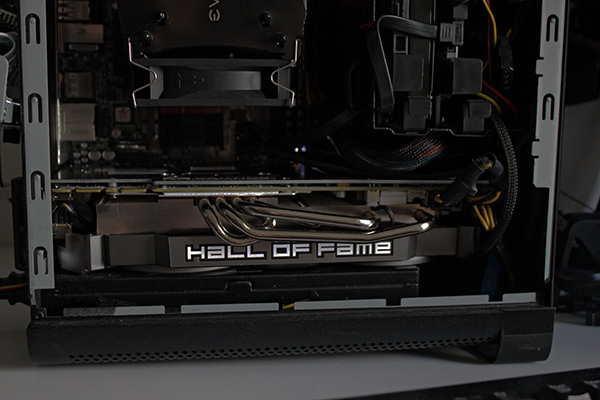 Once we got everything up and running, the GPU idled at about 32ºC, while the CPU idle temperature was 41ºC. 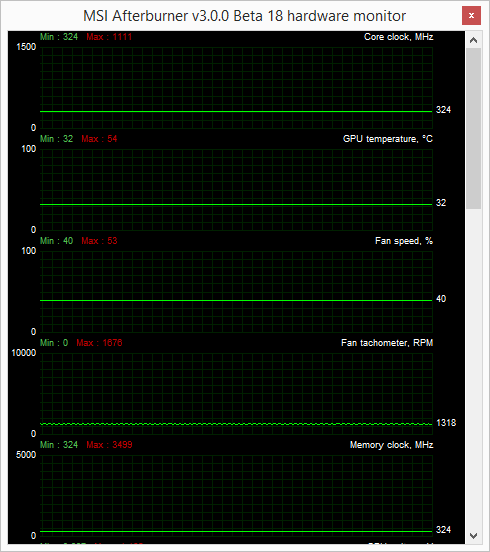 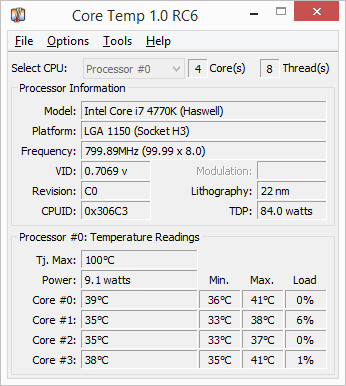 What we were really trying to find out is what the GPU temperatures will be like under load, so we installed Battlefield 4 and gave it a go. After 20 minutes of action we got the following readings. 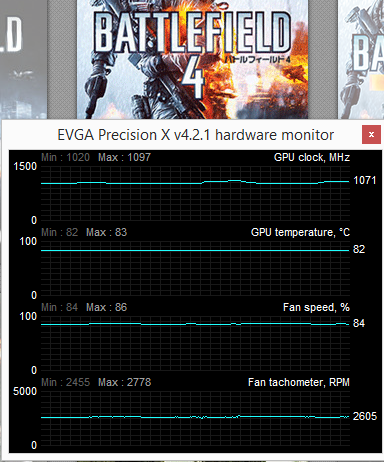 As you can see the temperatures quickly creep to the threshold. However, unlike AMD Hawaii cards, the GTX 780 Ti manages to maintain the base clock even when it gets too hot for Boost clocks. The Hoff card does not manage to stay at high Boost clocks, the GPU slides back to 1020MHz. However, keep in mind that 1020MHz is KFA2 factory overclock - the reference GTX 780 Ti clock is actually 875MHz. This has more to do with the tiny chassis than the card itself. We got the feeling that the Hoff simply could not get enough fresh air, since it's practically leaning against the PSU. As you can see the PSU is almost as long as the card and it restricts airflow to both fans. 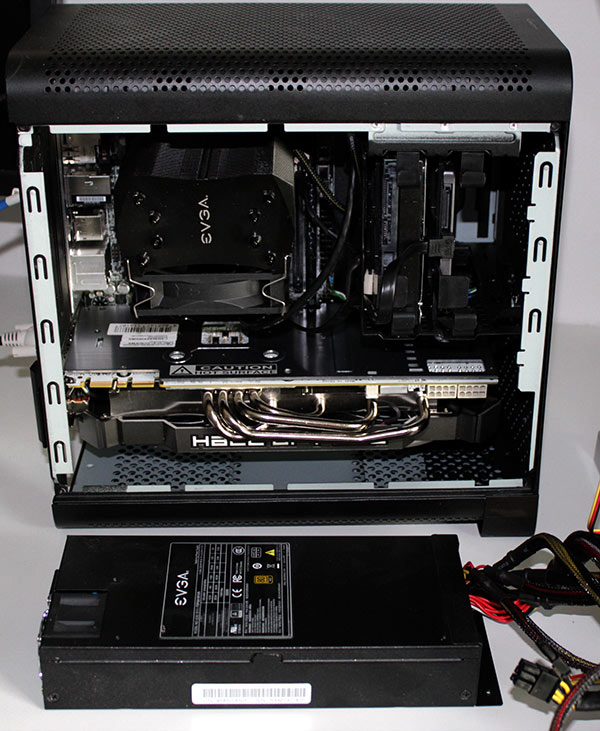 Hyper Boost helped a little bit, but the card still heated up to 80 degrees Celsius with relative ease. The triple-slot card is clearly not a good choice for this sort of chassis. The reference GTX 780 Ti did not experience these issues, as its smaller dual slot cooler doesn't obstruct airflow.

We decided to take out the PSU and repeat the test. As expected, we got much better results. The temperature dropped from 82 degrees to 74 degrees Celsius and the Boost clocks exceeded 1100MHz. Furthermore the KFA2 GTX 780 Ti Hall Of Fame card ended up 12 percent faster than the reference card in Battlefield 4.

Bottom line - the Hoff is quite fast, provided you don't stick it in a tiny chassis. (It was worth a try. Ed) 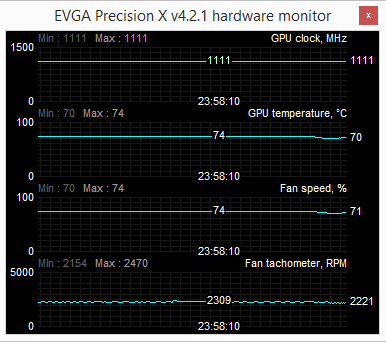 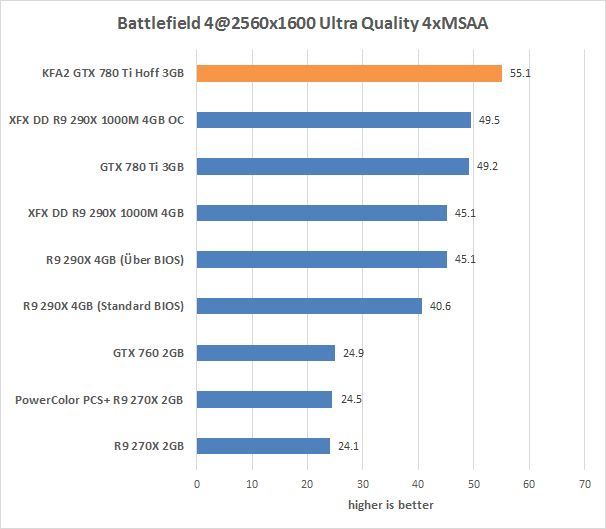 « Prev Next
Last modified on 31 March 2014
Rate this item
(0 votes)
Tagged under
More in this category: « Gainward GTX 750 Ti Golden Sample reviewed Here's our first crowdsourced AMD AM1 review »
back to top