Windows 8 Release Preview is out

Aero glass desktop is there


Many ended up worrying that mighty Microsoft has decided to drop the popular Aero glass interface in Windows 8. Luckily for them, this is not the case.

We can tell you that we installed a 64-bit ISO version of Windows 8 Release Preview and that Aero glass was there, as long as you had the right drivers for it. Release Preview is available for upgrade or download. Upgrade downloads a small file to your computer and updates over you existing Windows, in our case it was Windows 7 Home Premium.

After completing the process we learned that 40 out of 43 applications were compatible with new Windows which is great and the only major one missing was the support for current version of iTunes. The 64-bit (x64) is a 3.3 GB download, while 32-bit (x86) is 2.5 GB heavy. The classic update will decide how much you need to download.

In order to have Windows 8 Release Preview running, you need at least a 1GHz processor or faster, 1GB of memory for 32-bit or 2GB for 64-bit, 16GB of hard drive space for 32-bit or 20GB for 64-bit version and a graphics card that can at least support DirectX 9 with WDDM driver.

To make the most of Windows 8 you will need a touch screen tablet or monitor, internet connection to access the Store and 1024x768 is the minimal resolution and for snap apps you need at least 1366x768, a very common resolution for many laptops today.

Installation takes some 10 minutes which is really fast compared to Windows in the past and it works quite well once you get it installed. After critical updates you still need to reboot Windows, nothing new there, only that we feel it reboots faster than before.

The new Metro interface got us some full screen applications that look like a refreshing change in Windowed desktop mode. The new apps include Bing travel, Bing sport, Bing news, Bing finance, Weather and apps, mail, browsing as well as media apps. You can download a limited number of other apps from the store. We will get a bit deeper into this doing the day and get back to you, but it’s clear that Metro is a welcomed change. Let me underline that keeping the desktop is a very wise decision as it will make the transition from 20 years of desktop to Metro much smoother.

Most importantly, at least for us, you can install external applications like Chrome that will run in desktop mode and Internet Explorer 10 in desktop or metro style can open fudzilla.com just fine.

You can get the last beta of highly anticipated Windows release or read more about it here. 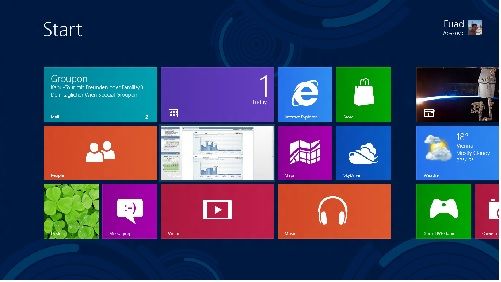 Last modified on 01 June 2012
Rate this item
(0 votes)
Tagged under
More in this category: « Employers admit to deciding on Facebook How to dual-boot Windows 8 Release preview »
back to top