F7D7501 is what Chromecast failed to be

Despite what most people want you to believe, Chromecast won't let you play your personal videos and photos. Even with the last update and the Real Player could, it won't play your video from your Android device. Instead it uploads it to the cloud and then plays it from the cloud. It will mirror Netflix that works quite well but, this is where the functionality stops.

Miracast on the other hand, in the form of a USB stick such as new Belkin F7D7501, solves this basic problem. This device mirrors whatever you see on your phone or tablet, all in 1080p resolution. Belkin promises effortless plug-and-play setup and since it's small and compact can be carried around wherever your job takes you. Since it connects on HDMI you need an USB power from your TV, device nearby or an external adaptor, just as you do with a Chromecast stick.

The Belkin F7D7501 Miracast dongle will display movies, photos, games or apps on any HDMI capable monitor or TV set in full HD 1080p resolution. We don’t know the exact range of this particular device but it should work at least up to 10 meters (32 feet). Miracast is built into Windows 8.1 so we expect that this device will work with this one too, making it more versatile.

The downside is the $79.99 price tag and the fact that it needs Android 4.2.x or higher. The latter is Google's fault, as they only added Miracast support in the Android 4.2 specification and therefore any device running an older version of the operating system won't support this screen sharing device.

If it cost half as much, or if it was at least priced between $40 and $50, it would have a chance to take a toll on Chromecast sales. As we implied above, this device will do much more than Chromecast and it will let you play private collection movies, photos or anything you have on your android tablet or a phone. 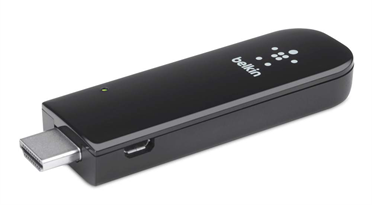 Rate this item
(0 votes)
Tagged under
More in this category: « Minecraft for 360 crosses 7 million in sales Nokia buys out Siemens Networks »
back to top