Seagate focuses on TDMR, SMR and HAMR for 12TB and higher drives 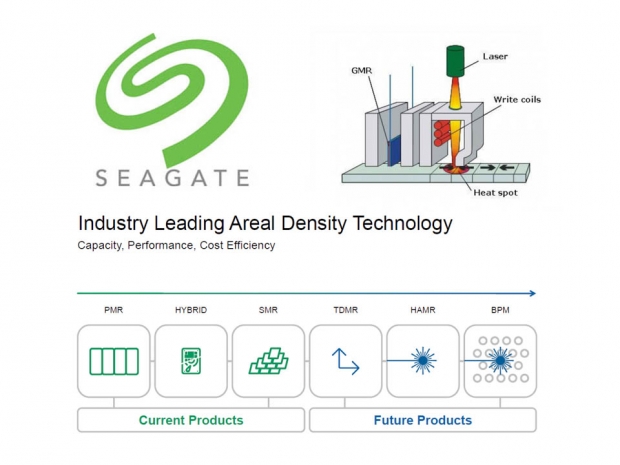 Back in July, the company announced a new line of Barracuda Guardian Series drives with up to 10TB of capacity for desktops, network-attached storage and surveillance systems. The drives offer sustained data rates up to 210MB/s. These drives are filled with helium to reduce platter thickness, motor power and flutter, and also use colossal magnetoresistive (CMR) heads versus shingled magnetic recording (SMR).

The need for higher capacity drives, especially for lots of unstructured data in server environments, have produced a need to develop more efficient drive recording technologies. Perpendicular magnetic recording (PMR) was introduced in 2005 and brought needed areal density decreases. Then in 2013, Seagate began shipping the first shingled magnetic recording (SMR) drives that increased overall disk capacity by about 25 percent over non-shingled storage. The company is now confirming plans to release nearline HDDs with 12TB capacity within the coming weeks or months. Market watchers expect that once SMR-based technology begins to mature, the drives will be able to replace PMR-based drives most frequently and at capacities of almost double what PMR has been able to provide. According to company executives, 18TB SMR drives are currently in development and are expected to make an arrival in 2018.

Another technology currently under development, two-dimensional magnetic recording (TDMR), will also help the company increase areal density by around 5 to 10 percent. As tracks get narrower, an effect called magnetic inter-track interference (ITI) makes it increasingly hard for heads to perform read operations. TDMR uses two or more heads to read data from several earby tracks at the same time, improving the overall signal-to-noise ratio delivered to the controller. By using an array of readers per head, there should also be a noticeable performance improvement for HDDs, even if not quite on the same level as SSDs. With TDMR, however, the array of heads increases bandwidth requirements for the controller along with the amount of information it needs to process, so these platforms may initially come at a slight cost premium. Seagate plans to have some of the first drives introduced next quarter.

Now that PMR technology has gone through several generations, there is only so much room left in bits per square inch before a new read-write head technology must be developed to accommodate smaller surface areas. Seagate describes SMR as a stop gap recording technology, where reads can be made smaller, but write heads cannot. The downside is that if data has to be rewritten, then track blocks have to be reconstructed, which takes time and lengthens disk write performance.

This is where heat-assisted magnetic recording (HAMR) comes into play, as it allows the drive heads to be made smaller to match the read tracks. A new and more stable recording medium is used that allows for writing on materials with higher coercivity and smaller grain size.

While PMR drives have an areal density of a few hundred gigabits per square inch, HAMR drives will be capable of delivering 5TB per square inch. As of 2016, no hard drives on the market were using HAMR, but Seagate expects the first 16TB HAMR HDDs to make an arrival in 2018 at the earliest.

Last modified on 13 March 2017
Rate this item
(0 votes)
Tagged under
More in this category: « Amazon's Alexa apparently works for the CIA Pioneer releases combo 4K Blu-ray disc player for PC »
back to top