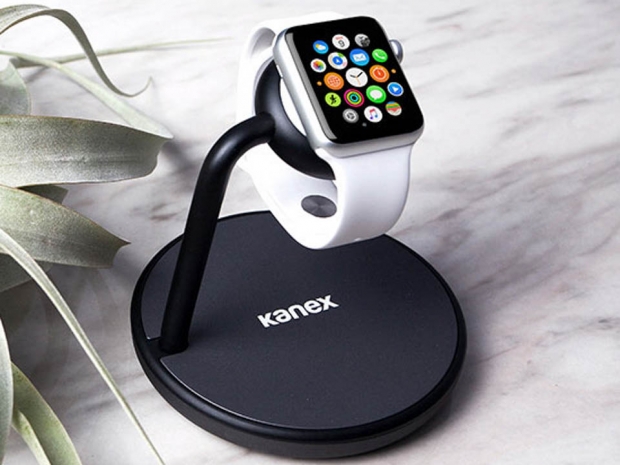 On Tuesday, Kanex announced the GoPower Watch Stand for the Apple Watch and iPhone, a two-in-one charging stand for both of the latest fruit-themed gadgets that integrates a magnetic charger and an additional USB port for simultaneous charging.

The low-profile, compact design of Kanex’s latest GoPower Watch supports both 38mm and 42mm models of the Apple Watch. Unlike many charging stands and docks that have been released since 2015, this unit features a tilted magnetic charging module to allow more convenient reading of the watch display when placed on a bedside stand, table or kitchen countertop.

The GoPower watch also includes a USB 2.0 port next to the A/C adapter plug, allowing users to simultaneously charge an iPhone or Android device. Kanex says the magnetic charger on the watch stand is Apple MFi Certified, which is the licensing program that ensures all accessory are checked for compliance and quality assurance. We have heard of third-party Apple USB chargers exploding, and this is why independent groups like UL run a series of basic electrical safety tests on chargers purchased in stores around the world.

Kanex has made the GoPower Watch Stand available for pre-order on its site for $69.95. The company currently sells a portable battery for the Apple Watch, which received a 2017 Honoree award at CES. The price range of Apple Watch stands can vary from $15 to $90 depending on features, build quality and number of ports. It appears the Kanex stand will go up against those from Nomad, Belkin, Press Play and Griffin, to name a few.