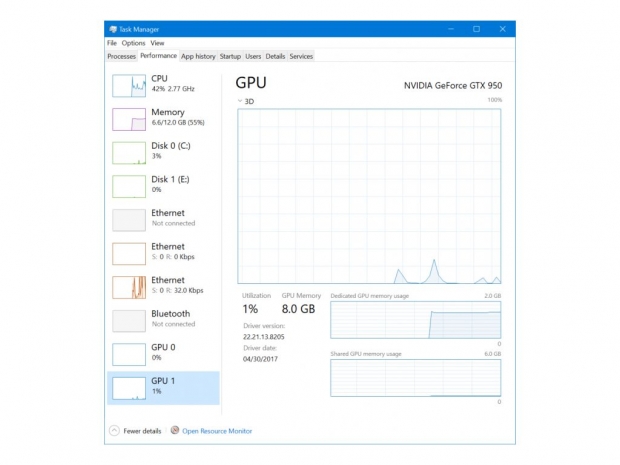 In the latest Windows 10 build

With the latest Insider Build for Windows 10, version 16226, Microsoft has added GPU utilization in the performance tab of the Task Manager.

While the same performance tab had both CPU, memory, storage and Ethernet utilization monitor, it lacked the GPU monitor so users usually opted for GPU-Z or other software to monitor their GPU as well as get detailed information.

When the feature becomes available for the standard version of Windows 10, users will be able to check out the model of the GPU, its usage, the amount of VRAM or shared memory it is currently using and more.

Although this does not mean that usual GPU monitoring and information software is going away, it is still nice to have that same information in the good old Task Manager.

The same Insider Build update, version 16226, has added plenty of other features, updates, and fixes, which you can all see over at the Windows Blog.

Last modified on 22 June 2017
Rate this item
(0 votes)
Tagged under
More in this category: « Russian hackers focused on 21 electorates Western tech surrenders to Putin »
back to top